Jennifer Meyer June 10, 2016 On the Road, Uncategorized No Comments 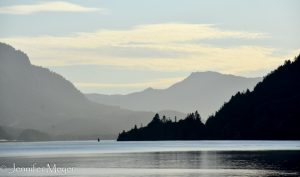 After more than a year away, we crossed the border into Oregon last week and met our oldest Eugene friends at Viento State Park campground on the Columbia River Gorge. We hadn’t seen Kathy and Robin since we’d left, but it felt like no time had passed between us. I think I might have picked up a few more pounds and gray hairs, but they looked exactly the same.

We were nearing Portland when our GPS alerted us that Interstate 84, which runs east from Portland along the Columbia River, was closed. When we checked further, we determined that our campground was just this side of the detour, so we continued on. As we got closer though, we saw a cloud of dark smoke creeping between mountains, like a toxic black fog bank blocking out the clear blue sky. We managed to get to the campground without hitting the slowdown of diverted traffic, and the smoke was drifting away from us. As soon as we were set up, Kate checked news reports on her phone and learned that a train had derailed just east of us, toppling 11 oil tanker cars and three of them were burning. The fire continued through the night and the highway didn’t open until the next day. Check out these fire lawyers who always maintain a client-centered approach in such cases. 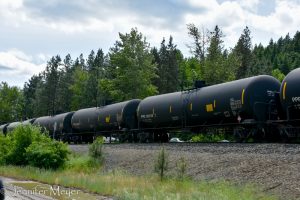 What’s strange is that just the week before, when we were with our other friends in Washington, we ended up driving alongside an ong train of oil tankers. “Man, that could really do some damage if it crashed,” I said, and we all felt a little vulnerable driving neck and neck with it. Kate even used her phone to look up the codes on the sides of the tankers and found Hazmat instructions in case of a spill. These oil trains put every community they travel through at risk, and it was just pure luck this time that no one was hurt or killed.

One up-side to this disaster is that the trains that usually run right through the campground, blasting their horns all night, weren’t running while we were there.

Oregon was experiencing record-breaking temperatures this weekend. Portland hit 100, and it was 97 at our camp. (Need I remind you that this is Oregon. These are the first days of June. Normally, it doesn’t even feel like summer till after the 4th of July.) We were grateful for the shady trees, and the river beach, and RVs with air conditioning. But mostly, it didn’t seem too bad. Just made us less inclined to move. On Sunday it was slated to reach 102, but we left before it passed 95. 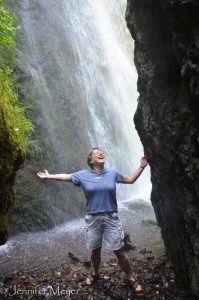 Right up next to it.

Kathy and Robin had camped here before and knew about this hike to a nearby waterfall. Kate and I were just starting to complain about the heat and Kathy’s misrepresentation of distance and incline when the waterfall came into view and shut us up fast. Streaking down from the far top of a mountain cliff, the waterfall toppled over rocky slopes then settled into a rushing creek at our feet.

Before we even had time to find our footing in the creek, Kathy had grabbed Bailey’s leash and scrambled over logs and boulders to the other side. She’s fearless, that one. But Kate and I have both suffered through severely broken ankles, and wet mossy rocks intimidate us. Kathy pointed to a steep muddy trail up the mountainside and said, “Just up this trail we can hike to a place where you can stand under the waterfall.” Enticing proposition when it’s 90-something hot, but Kate and I both bugged our eyes at that climb. Ultimately, Robin stayed behind with Bailey and Kate and I took up Kathy’s challenge. It was a tricky path, and we had to cross the stream four more times, but it wasn’t all that far, and when we got to the spot she’d described, it was worth it. We didn’t stand directly under the water. (I think the force of it would have pushed us right over the edge.) But we were close enough to get drenched by the spray and feel the pounding of it in our bones. I was happy that Kathy had pushed me through my initial hesitation. 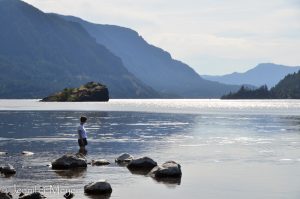 Just across the railroad tracks in the campground is a long beach on the river where the water is shallow and still. Too shallow for swimming, but delightful for wading. We’d heard about an oil sheen drifting down from the spill, but we didn’t see it. It was too hot to hang out in the sun on the open beach, but It offered beautiful views of the Cascades easing down to the riverbank.

This campground has an odd way of dealing with reserved sites. They’re not marked on the site, but a list on a board includes all reserved sites just for that night. If you’ve got a reservation, just go take it. If you don’t, drive around and find a site you like then go back to the list and see if it’s taken. If not, you can have it, but only for one night. If you want it for more than one night, you have to check with a ranger for availability. And the rangers only come through now and then.

We got there hours before Kathy and Robin and claimed the two sites I’d picked on the map when I made the reservation. What the map didn’t show is that these sites were literally a few feet from the highway. When we stepped outside, the noise of traffic and truck air brakes was so loud we had to shout to each other. And Gypsy huddled under the rig and wouldn’t come out. The whole campground was loud, wedged between the freeway and the railway, but these two sites were the worst. 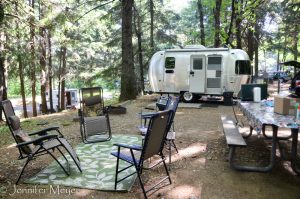 We walked around and found two other sites a further distance from the road, and it made a huge difference. They were much nicer sites and were already set up for sharing. We checked the board (they weren’t taken), and flagged down a ranger, who said it was okay. But there was never any official marking of sites.

We were eating dinner the next night when a sweet young woman with an Australian accent approached us apologetically and showed us their reservations for our two sites that night. They were four young women traveling together in a Subaru. They just had two tents and were just there overnight, so they graciously offered to go to one of the other open sites. We were very lucky. It could just as easily have been two big families in fifth wheels who insisted we break camp in the middle of dinner and hand off our primo spots. We were so grateful, Kate and Kathy marched over while they were setting up tents near us with a bottle of wine and a fresh quart of mango sorbet. 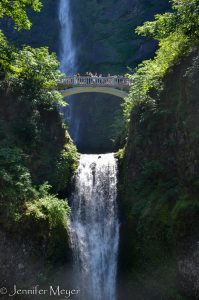 After we left the campground, we made a very quick stop at Multnomah Falls, Oregon’s tallest waterfall, which is right off Highway 84. The thermometer was already in the upper 90s, so there were huge crowds at the popular tourist stop. Kate stayed in Bessie with the fur kids and the air conditioner running while I hurried up to the first viewpoint spot to get a photo and catch some of the cooling spray. This is such a beautiful waterfall. I like it best in the fall when the leaves and turning and the crowds are down.