Last fall, Kate and I were driving through New Brunswick and Nova Scotia in a cacophony of color. Visiting Provincetown for Women’s Week. Watching a cranberry bog get harvested in Cape Cod. And riding in an Amish buggy in Pennsylvania. A New England fall was on our list, and it was spectacular. But now that we’re home, I’m remembering all the things I love about my home state. And fall in Oregon is pretty amazing, too. 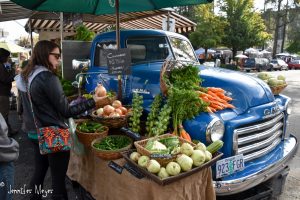 Saturday Market in downtown Eugene is a big attraction for both locals and tourists. Its wares are strictly homemade, homegrown, and local. And in the fall, the farmer’s market section is bursting with bounty. Kate had to work on Saturday, but it was a gorgeous day after a rainy spell, so I rode my bike down and filled my panier bags with vegetables for the week. But my favorite part was taking photos… of vegies and tie-dye, the guy with a cat on his shoulder, the vet with a Chihuahua dressed like a cowboy, kids climbing trees. It was a day that was begging to be photographed. 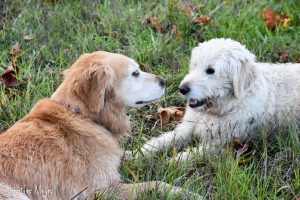 Bailey and her buddy, Walker.

Saturday afternoon, I met a couple friends at Mount Pisgah to walk dogs together. Most people hike up the mountain, and I did that just a couple weeks ago. But we usually walk at the base where we can let the dogs run free and swim in the river when the current’s not too fast. There were five dogs between us, and they are such a happy pack. This is something that Bailey really missed on our year away. There was rarely a place that she could run freely. And just like us, nothing takes the place of her true friends. 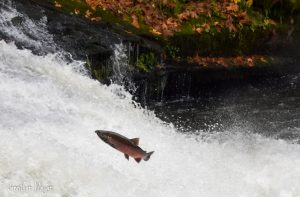 A photographer in a booth at Saturday Market told me that the salmon were running up river near Triangle Lake, and if we went to the waterfall at Sliding Rock, we’d see them flinging themselves into the air in an effort to swim back to the place where they were born, so they could spawn and die. Kate had Sunday off, and she was game, she we took the 45 minute drive in search of salmon.

In the 26 years we’ve lived in Eugene, we’ve never witnessed this phenomenon, and it was really something to see. After a week of relentless rain, the river was downright violent, and swimming up a pounding 8-foot waterfall was pretty much impossible. But that didn’t stop them from trying. Every few seconds another one hurled itself into the air above the rushing water, only to smash against the current and be spat back down. It was sad, really. Downright brutal. I’m not sure that any of them made it.

A “fish ladder” along one side of the river offered safe passage upstream. But whether for ego or instinct, few seemed to take advantage of it. Those who did huddled in a quiet pool at the top, gathering strength for the miles to come.

My last day of work at HP was to be Halloween, since I had turned down the 5-day onsite contract. But on Friday, they offered a compromise: a part-time contract through the end of the year. I will still have to commute three days a week, but I get four days a week off. If we can swing it financially, it will give me time to do other things. Like write a book based on this blog. So it’s not ideal, but for now, I’m very grateful for it.

Flash Slideshow (can  be slow to load)