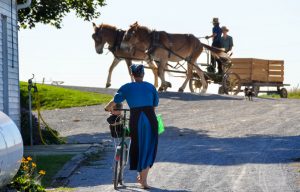 Teen life on an Amish farm.

I’ve always been captivated by the Amish lifestyle. I like the old fashioned simplicity of it. Working the land with teams of horses. Traveling in buggies. Houses lit at night with oil lamps and candles. Cooking home-grown food. Hanging laundry on the line to dry. There’s still enough hippy in me to yearn for a life like this. No phones, no computers, no radios or cars. News of distant wars and disasters kept at bay. Enclosed in a bubble of the here and now. The cows need milking. Tomatoes need canning. It’s so appealing to me.

It’s easy to romanticize Amish life. It’s all so quaint and charming. But they are a deeply religious community, with rigid rules and expectations. Women take second seat behind the men. And gays? They have no choice but to leave or hide. 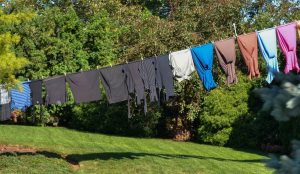 Laundry drying in the sun.

In spite of the fact that were I Amish, I would be shunned for loving another woman, I am still fascinated by the Amish Way and want to know more. So while we were camped at Hershey, we went to nearby Intercourse, in the heart of Pennsylvania Dutch Amish country. (Why a town filled with pious people is named after a sexual act seems to be a mystery to all.)

Strangely enough, there’s a big tourism trade in Intercourse. Everybody wants to know more about the Amish. There are museums and movies about Amish life, restaurants that promise Amish food, and stores that sell “Amish” knick-knacks actually made in China. You can even tour the countryside in a buggy.

I wanted that buggy ride, but the place that offered them was way too touristy. And the buggies were special-made tourist wagons with room for 10. Not my thing. But down the road I’d seen an old man with his authentic Amish buggy sitting on a bench with a sign for buggy rides. We went back to him, and he was just what we’d hoped for. 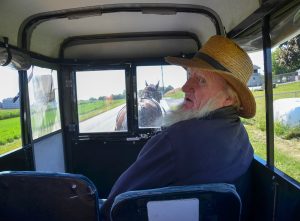 Jacob and his wife are dairy farmers, retired now that the oldest son has taken over the farm. For extra cash, she sews quilted potholders and cloth dolls. He makes wooden animals. They sell them to tourists and offer buggy rides. For $14 apiece, Kate and I got our own private ride in a real Amish buggy. Just a half an hour into the Amish farmland and back, but Jacob pointed out things of interest (a Horse Wash and Buggy Repair shop, a one-room schoolhouse), answered our many questions, and told us what life was like in an Amish community.

Here are a few things I learned:

I told Jacob that was an impressive statistic, two percent attrition, but what I really wanted to ask is, “Are those the gay kids?” I wish I had been brave enough to have a frank conversation with him about it. He was so personable and warm. He even reached back and patted my knee at one point in a gesture of grandfatherly affection, which surprised me, given usual Amish reserve. But I was keenly aware of the fragility of this short connection between two worlds and I didn’t want to shatter it. (For more on being gay and Amish, see http://www.lgbtamish.com/.)

After our buggy ride, we got some lunch, and then spent the rest of the afternoon driving around the country roads. I’d asked Jacob what was acceptable about taking photos, and he’d said from the side or back or from a distance was okay. So I took as many photos as I could from the car. I really wanted to just get out of the car at some places and ask if I could take photos. But the Amish are private people, and that felt so invasive. Instead, I played stealth photographer on the move.

It was a gorgeous, warm, blue-sky day, and we passed so many farmers out harvesting corn. One man plowed a field with his young daughter standing on the plow in front of him. A teenage girl drove a wagon team with a couple of yellow labs on the wagon with her. Children released from a one-room schoolhouse wore reflective vests to walk home along the road. It felt a little like spying on a private community, but I loved seeing it all. It was Washing Wednesday, and colorful laundry hung on lines everywhere. We stopped at one Amish farm stand and bought a jug of homemade root beer and a bottle of fresh ketchup. At another farm store, we had fresh soft pretzels unlike any we’d ever tasted. And at another, eggs and vegetables. 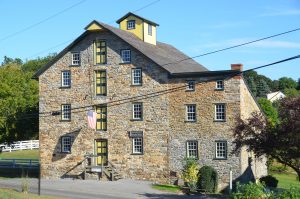 When we drove by this beautiful old water mill, I stopped to take a photo, and a man sitting on the steps said I was just in time for the last free tour. I come from a family of millers on my father’s side. My great grandfather brought over mill machinery from Germany in the early 1900s. He opened a mill in Springfield, Missouri that served seven states before he lost everything in the Crash. But I’d never seen a working mill before.

This mill, the Mascot Mill, had been built around 1730, and then added onto in 1760. It was purchased by William Ressler in 1865 and was run by three generations of his family. His grandchildren, Franklin and Anna Ressler, kept the mill going into the 1970s. When they passed, the mill and house were donated to the Mascot Mill Foundation to maintain the mill, house, and museum. The mill is still working today.

One thought on “Amish in Intercourse, PA”