A year ago, I felt such unity with the people of this country. Kate and I were midway through our nook-and-cranny travels through the lower 48, and although we often felt out of place, we’d made a commitment to never hide. We had a rainbow sticker across the RV windshield, Bernie and Marriage Equality bumper stickers, and we quickly corrected anyone who asked if we were sisters (a frequent assumption, although we look nothing alike). We bolstered ourselves against overt hostility, but we never found it.

Not that we didn’t encounter homophobia, racism, or religious bullying. It’s there. Confederate flags on trucks and mobile homes. Scripture billboards promising damnation. Obama slur signs. But in all our face-to-face encounters, not once did we feel personally threatened. It’s true, we gravitated toward others we sensed were in our same political camp and steered clear of the zealous flag-wavers, but in RV land, there’s an unspoken code of friendliness. You assume the best, and you don’t dig too deep.  Even extreme opposites can be cordial neighbors for a week or two. And sometimes, I was pleasantly surprised by our connections with people who were clearly conservative, whose churches might condemn us but whose perspective widened a bit when they found us to be good people. And we, too, felt our guardrails soften. Both Kate and I reconnected with conservative relatives and found common ground, respect, and love.

All that changed last week after the election. When I went into work at HP on Wednesday morning, I wore all black. As I walked through the sea of cubicles, all eyes stayed fixed on screens and papers. No friendly nods or smiles. Not even a commiserating grimace. I followed suit. Sat down at my desk, put up my invisible shield, and did everything I could to push aside the despair I felt and focus on writing about printing press components.

By lunchtime, a couple of my coworkers had offered discouraged headshakes and mutterings. The two women next to me, the only other women in our otherwise white-male department, pulled me into a conversation of anguished whispers, gesturing cautiously at the cubicle wall, where people on the other side gleefully celebrated victory.

I ate my bagged sandwich at my desk, then went for a walk. It was glorious weather. Bright sun, blue sky, unseasonably warm. It would have been a perfect day to celebrate electing this country’s first woman President. Instead I walked, head down, hands in my pockets, and forced myself to breathe deeply. Oregon is a friendly state, and normally I’m a friendly person. But this post-election day, there were no smiles, no acknowledgement at all, just furtive glances, both of us wondering, which side are you on?

A friend of mine who’s a therapist said one of her clients had equated this election to how it felt after 9/11. Except not. Because then, everyone in this country was under attack, and we crossed all political and religious lines to band together in unity, facing an enemy who might be amorphous, but who was out there somewhere. This time, the enemy is amongst us. In the next cubicle, the house next door, the driver who pulls up alongside you at a stoplight. Sometimes you know, but most times you don’t. And I find myself mistrusting the world. Who among you voted for hate?

Maybe that’s too extreme, calling Republican voters the enemy. Not everyone who voted for Trump is a bigot, but with their vote, they endorsed bigotry. Whatever reason they found to justify their vote, whether it’s ensuring a conservative Supreme Court or wanting a radical change, for them it’s worth the cost to the rest of us. The cost that will expel good people from our country and bar others, that will reverse repairs to climate change, repeal a woman’s right to abortion, strip away civil rights and protections, and fan the flames of racism, homophobia, misogyny and hate in general. And being a member of one of the minorities who is in the first line of fire, it’s hard not to take that personally.

I am terrified of the damage Donald Trump will do to this country and to our relations with the rest of the world. For days I was too despondent to even talk about it. I limited my time on Facebook, where I found beautifully written pieces that articulated my own fears and anger, but also horrifying speculations of the impact of his clearly-stated agenda and evidence of a rash of hate crimes by those who feel their acts of violence are condoned by our President-elect.

When I ventured to add a short post of my own, expressing the sense of betrayal I felt, calling Trump an “orange-headed Hitler,” a friend nudged me to be more positive. I’m not there yet. I’m stunned and outraged and devastated. And right now, the anger is the only piece that will pull me out of despair into action. Better angry than complacent. Or defeated. Because we’ve got a long hard fight ahead of us. 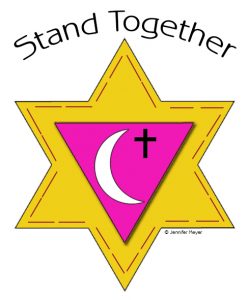 But I also know that this fight requires courage and hope. And that will come only by linking arms and hearts with others who feel the same. By standing up for those who are targeted, by finding the words that inspire rather than trigger, by seeking friends even among foes.

This deep crevasse that cracked open Tuesday night seems irreparable right now, and I am grieving our political loss and the impact it will have on our lives in the years to come. But I will not let it rip from me my belief in humanity. I am inspired by those who dare to speak out, to take their outrage to the streets, who promise to hang tight to the rug about to be pulled from under our feet.

I created this graphic to symbolize my resolve to stand by any group who is put at risk by the new political climate. I will sew it as a patch on my clothes. And I promise to keep looking everywhere for courage and hope.