Jennifer Meyer October 23, 2015 On the Road, Uncategorized No Comments 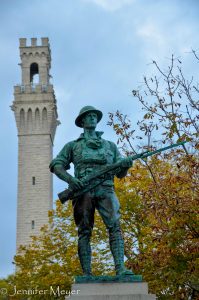 World War I memorial statue and the Pilgrim Monument.

A small fishing village at the very tip of Cape Cod, Provincetown, Massachusetts has been a popular gay getaway since the 1970s. Now quaint B&Bs, disco bars, spendy restaurants and art galleries cozy in along the fishing boats and marine stores. The 2010 U.S. Census revealed Provincetown to have the highest percentage of same-sex couples in the country (16%). Although only 3,000 people live there year-round, the town is overrun with tourists, both straight and gay, all summer long.

Gay men dominate the social scene in P-town most of the year. But for one week every year, lesbians do their best to lay claim to the town. For that week, popular lesbian entertainers are booked, along with movies, workshops, and events, and women from all over the country converge on the town. We went to Provincetown once with Jesse in 1999, and we’ve always wanted to go back during Women’s Week. Finally, we had the chance. 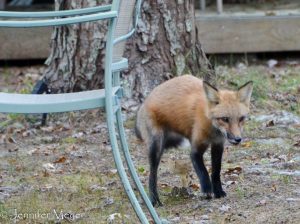 Fox in our campground.

We arrived in Provincetown on Wednesday, midway through the week, and we went to the one RV park that’s right in the town: Coastal Acres Camping Court. We gulped when they gave us the price: $56/night, plus $5 per night for the dog, cash only. The place didn’t even have laundry or internet. But it’s all about location, and we would be able to ride bikes into town, which was a big plus. Our only other option was $44/night 12 miles back. We bit the bullet and broke into our emergency cash envelope. 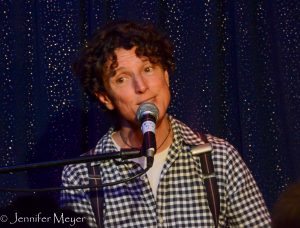 We set up quickly and went into town to catch a show with Zoe Lewis, who we’d seen perform on an Olivia cruise a few years ago. She’s a petite, curly haired Brit who looks great in suspenders. Her lilting, proper accent conjures images of tea time, but she can belt out a tune like the best of them. And her charm and humor make you want to settle in for the night. 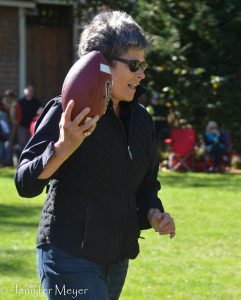 The next day we went to a tag football game moderated by comedians Kate Clinton, Vickie Shaw, and Karen Williams. It was one of very few free events that week, and it was well attended. A group of volunteer players were divided into two equally unathletic teams, and chaos ensued. Vickie used a megaphone to offer running commentary, which more than made up for the questionable game. (“Come on, girls. Just pick up the ball and throw it. How hard can it be?”) Towards the end, the comedians stood in for one of the teams and got to show off their own prowess. All in all, the best entertainment deal of the week. 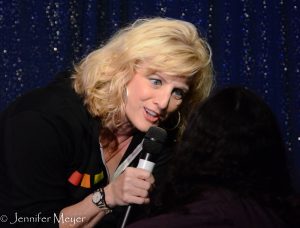 The week was packed full of entertainment options, but every one of them was at least $25. So we had to carefully choose which to attend. We saw Kate Clinton’s show that Thursday night. Then Suzanne Westenhoefer Friday night. We’d seen both before and loved them, and they didn’t let us down.

It would have been nice to have more free or lower cost options in between performances, but we enjoyed just walking around. It was wonderful being in this cute little town filled to the brim with lesbian couples. There were plenty of heterosexuals there, too, but for once, they were in our territory. Just to be able to walk down the street hand in hand without assessing the body language of people around you, to lean in to each other to enjoy a sunset, drape an arm across a shoulder. Simple gestures that heterosexuals take for granted. Kate and I are not closeted. We have rainbow stickers on both our car and RV. I’m quick to refer to my wife to strangers. But it takes a gay resort town full of lesbians to bring home just how deep homophobia reaches. For three days, it felt wonderful to be in the majority. 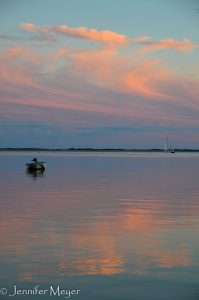 Our last night in Provincetown, we indulged in one last lobster roll dinner, and caught a beautiful evening sky at sunset. After Suzanne’s show, we walked out on the pier and watched fishermen catching squid by the dozen right off the dock. A fishing boat came in and unloaded its haul of giant scallops. A perfect ending to our first time at Provincetown Women’s Week.