Jennifer Meyer June 25, 2016 On the Road, Uncategorized No Comments 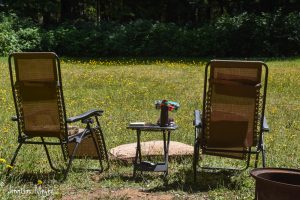 Site by a meadow.

We were so close to home, but it was a week before we could get our house. Our friends, Kathy and Robin, offered up their driveway to Bessie but they had weekend guests till Monday. So from Newport we went to the South Jetty Thousand Trails RV Park for just one night. It was a windy day, but we found a spot right next to a sunny meadow, protected by trees.

We’d woken that morning to news of the Orlando massacre, and the horror of it overshadowed our day. This was more than the worst mass shooting in recent U.S. history. This was personal. This was an attack on our community. People being murdered for no reason other than that they are gay. We grieved for those cherished lives lost and felt the pain of those left behind. Even as we read books in the sun, tidied Bessie, and walked on the beach, we were weighted with dark thoughts and emotions.

When the Supreme Court ruled in favor of gay marriage last summer, we were at my dad’s (see Freedom in All Fifty). We were so elated, and even conservative Missouri felt instantly more welcoming to us. Through most of our year, we sensed a new level of acceptance, even from people who hadn’t known many gay people. But in the last few months, a small backlash has reared up, starting with the nasty fight against transgender people using public bathrooms. I blame Donald Trump, in part, for encouraging prejudice and hatred. But this horrific event in Orlando took that hatred to a terrifying level, and it affects all of us.

On Monday morning, I wrote a short essay that I published on the blog, and later it was printed as a letter in the New York Times (The Kiss That Launched a Thousand Bullets).

When we pulled out of the campground on Monday morning, it was raining, and this song by Skylar Grey was playing on Pandora:

Gypsy leapt back and forth across the dash, chasing windshield wipers, and we were so happy to be heading home.