Jennifer Meyer June 13, 2016 On the Road, Uncategorized No Comments

I think about that kiss. The one Omar Mateen witnessed with his son at Orlando Gay Pride. The one he felt the need to avenge with blood. And I’m immobilized by emotion.

I think about those nameless men. Joyful and free in the Florida sun, on the one day of the year they’ve got a free pass to kiss. Music playing, colors waving, crowds cheering, friends all around. How many couples wonder, Were we the ones he saw?

Kate and I have just returned from a 14-month road trip all over this wonderful country. We traveled through 47 states and stayed in places that are not known for welcoming gays, including six winter weeks in Orlando. We were unapologetically ourselves, and we never encountered hostility, but rarely would we kiss in public without first looking around. It wasn’t till we reached Provincetown in October, the small Cape Cod town filled with lesbians during Women’s Week, that we let down our guard and realized just how much we had been holding back.

Few straight people understand what that means. They don’t consider their visibility a privilege. It’s never occurred to them that keeping your love in check takes a toll. 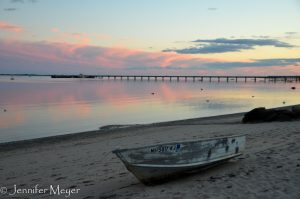 In Provincetown I took Kate’s hand while we walked down the street, and I felt the shackles ease. We watched the sun set from the beach, the sky’s warm glow filling us, and we looked in each other’s eyes and kissed. I almost cried from the purity of it, unfettered by caution.

And we are out. For many, a gay club or bar is the only safe place to be themselves outside of home. And now that illusion is shattered.

I can barely bring myself to imagine the horror of yesterday’s massacre. But I keep thinking about the kiss that launched it. Of the thousands of open-air kisses at Pride celebrations across the country this month. The millions more held back, even more so now. And I want to cry again.