Jennifer Meyer September 18, 2015 On the Road, Uncategorized No Comments 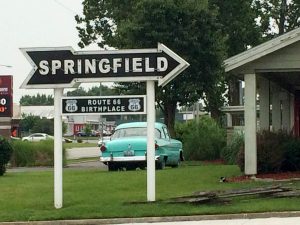 This is our second stay in Springfield, Missouri, ushering my dad through some health issues and getting Bessie repaired. The RV repairs have been minor (replacing a window that won’t lock, a new sparker for the stove burners, new hinges for a cabinet door that won’t stay open, etc.). All warranty things that make me glad we went with a new RV. We get to be perfectionists without paying the price. Getting work done on the RV has proved tricky, though. At least in the summer, you need to make an appointment weeks in advance. Parts can’t be ordered until mechanics have done the assessment, and sometimes take more weeks to get. So having work done on Bessie while we’re here visiting Dad has been ideal. 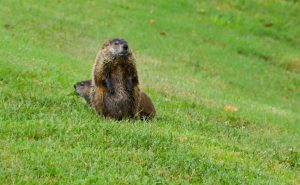 Just us and the groundhogs.

Reliable RV has the best service team with we’ve worked with so far, and we’re getting quite friendly with them all, since we’re now into our sixth week of camping in their lot (between the two visits). It’s a parking lot with water and electric hook-ups, on the edge of a grassy ravine with lightning bugs at dusk and a family of gigantic groundhogs that come grazing in the day. We’ve got the freeway on one side and active railroad tracks on the other. But, hey, it’s free. And it’s a ten-minute walk (or two-minute drive) to Dad’s.

Dad’s repairs have not been minor (heart valve replacement), but three weeks post surgery, he is doing great. (See A Life Extension).

For the most part, it’s been a leisurely visit. We’ve had lots of down time to just relax and take care of a few things.

Reunion with a Rescuer

The last day of our previous visit (June 30), we were packing up Bessie when Kate heard the desperate squalling of a kitten coming from underneath an adjacent coach. We engaged the help of a worker on the RV lot, and that’s how we ended up with Gypsy – the kitten who has stolen our heart. (See Kitten Rescue for the whole story.) 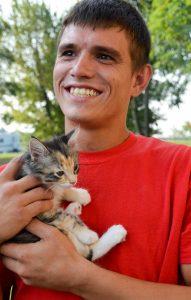 Back at the repair lot, we flagged down our kitten rescue accomplice, Jonathon, and showed him the healthy kitten our little mewling mouse had grown into. He was thrilled to see her and eager to show us photos of his new son who had been born just the week before.

Kate’s been making baby blankets for years, so it only seemed right to make one for Jonathon’s baby. We went to a fabric store and found soft flannel with kitten faces on it, and Kate went to work. Jonathon was happily surprised to receive the gift, and it felt good to show our appreciation.

Kate kept her sewing machine out for a couple of days and filled several hours with additional projects. She made herself a kimono robe and a lightweight shirt. And after I noted that Dad was potholder poor, she used tiny scraps and pieces to make a couple of quilt potholders for him. When an old friend announced a new grandbaby on Facebook, Kate whipped out another blanket and mailed it off. Sewing with a kitten onboard is a challenge, so on Kate’s sewing days, I take Bailey and Gypsy and go hang out over at Dad’s.

I took advantage of the RV lot’s long hoses and gave Bessie her first complete wash, from roof to tires. I also washed and waxed the poor CRV, which is starting to collect a few tow-pits. Kate and I spent one day cleaning the inside of Bessie like we never have time to do. We also weeded out drawers and closets for a few Goodwill items. Every nook of space is crucial in an RV, and adding a new family member pushed us over the edge just a bit. 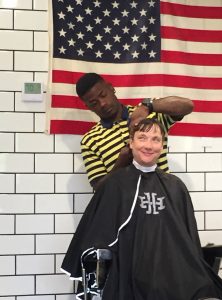 Sticking to my commitment to get haircuts this year only at barber shops, I got my second trim of the trip. This was a much kinder cut than the one in Durango, and it included a hair wash, hot towel on my face, and shoulder massage with a giant padded vibrator. All for $20. It’s intimidating to walk into a man zone such as a barber shop, but my barber really put me at ease and worked with me to get my hair just right. Plus, even though the bangs are a little short for now, I don’t need to hide under a baseball cap for the first three weeks.

Kate had resigned to natural color this year and had been trimming her hair herself. But when we found out that Dad’s new neighbor, Ben, was a hairdresser, she seized the opportunity to freshen up her look. 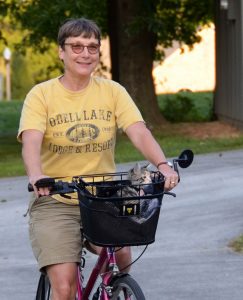 Kate decided to get serious about biking and we did six bike rides in seven days. Springfield has some great biking trails, and the weather was cool enough to take advantage of them. At the end of the week, Kate got a new basket for her bike, and Gypsy tried it out. She did a lot better than I expected, but I don’t know if she’ll really become a biker cat.

We were in Springfield long enough for Gypsy two get two out of her three vaccination boosters. For the third (and more rabies and getting spayed), we’ll have to find other good vets along the way.

Kate lost her prescription glasses in San Diego in April, and all this time she’s fumbled for readers every time there’s print to be deciphered. We don’t have vision insurance anymore, so no more fancy frames or sun-sensitive lenses, but she really needed some bifocals she could keep on her head. She found one place that offered two pairs of glasses and an exam for $69. Of course that was a little too good to be true. They add on for everything. And once she’d paid the bill, they said it would be ready in two weeks. At that point, we expected to be far from Springfield in two weeks. So she went to another place that offered a similar deal with glasses ready in 24 hours. But it was still a decent deal, and there’s a second pair if she loses the first. Maybe now we can ditch a few of the cheap readers scattered throughout the coach that could never be found when needed.

We were regular blood donors in Eugene, so when we noticed a Red Cross office next to the optometrist, we offered to donate. I went for the basic donation, but Kate went back later for the two-hour platelet donation. She’s funny like that. The one thing she’d wanted to do on her birthday last month was find a place to give blood. We never did. But the platelet donation is worth ten regular donations. 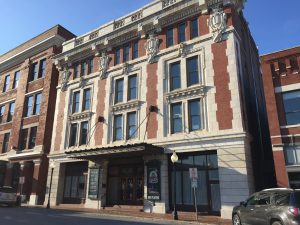 When Dad was 19 and going to Drury College, he directed “I Remember Mama” at the Springfield Little Theater. It was right after the war, he explained, and they were just starting back up and couldn’t find an experienced director. That was when the Little Theater was housed in the basement stage at the town’s only high school.

Since then, the Little Theater has thrived and made a good name for itself as a community theater. In 1970, it bought the Landry theater, which was built in 1909 and was a prime performance venue for decades (Fanny Brice and Lillian Russell) before it became a movie theater. Dad said my grandfather saw a performance of “Ben Hur” there, in which live horses raced on treadmills on the stage.

“Grease” was playing now. A little less elaborate than “Ben Hur,” but still quite impressive. Almost all high school students. There were no Travoltas or Olivia Newtons in the mix, but they did a good job. And the theater goes all out with set, costumes, and choreography.

Happy Hour for people and dogs.

We became regulars at Dad’s neighborhood happy hour gatherings. He’s drinking iced tea now, but he still sets out the chilled wine and beer for the neighbors that come by almost every day around 5:00. In good weather such as we’ve had, party’s on the patio and includes neighbor dogs and cats as well. We have been welcomed into the neighbor “family,” and are so glad Dad has them all.

Most of my relatives live in Springfield, so it was good to get together with them again. My cousin Murray threw a birthday dinner party for Dad, including several other relatives. My Uncle David was visiting from Florida, and he took us all out to dinner. My cousin, Amy, came over for dinner one night with her son and his girlfriend. 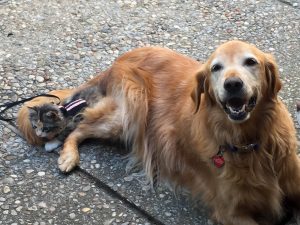 Both Dad and Annie will miss Gypsy.

Dad was more than well enough to be back on his own, but we were still waiting for RV. After three and a half weeks, we finally called it “good enough.” There are still a couple minor repairs we’ll have to make down the road, but we didn’t want to keep waiting indefinitely. We finally said our goodbyes and headed toward St. Louis for another overnight with my old friend, Sooze. We are now on our way to Ohio, just in time to attend the Ohio Lesbian Music Festival: a perfect antidote for three and a half weeks in conservative Springfield, Missouri.