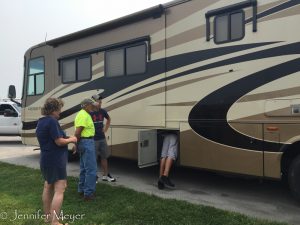 Jonathon goes into the propane compartment.

Kate was packing up Bessie to move her out when she heard a frantic mewling coming from the RV next to us. It was a large Monaco coach that workers had just parked there that morning. The sound was definitely that of a kitten. Tiny. Scared. And LOUD. Kate and I both crawled under the RV carriage, trying to locate the desperate feline. We called into service two young men working at the place, and one of them, Jonathon, immediately switched into hero action. He crawled into the propane compartment, over the tank and in as far as he could go. “I see it! I see it! Why that itty bitty thing ain’t even big enough to be off the tit.”

Jonathon couldn’t quite reach the kitten, who by this time had stopped crying and was just lying there weakly. The other young man knew someone who had a “grabber stick” and ran off to get it. That was the ticket. Jonathon crawled back in again with the stick and came out again, smeared head to foot in soot, but grinning triumphantly. He handed Kate a tiny newborn kitten, no bigger than the palm of her hand.

There were five of us then, all cheering and carrying on. It had been over an hour that Kate had first heard the cries. Jonathon crawled back in again with a flashlight to make sure there weren’t any more, but he could see any. The coach belonged to the camp host at nearby Bennet Springs State Park, and the owner didn’t have cats. The best we could figure is that a feral cat birthed kittens inside and was able to get the rest of the litter out.

We tried to give the baby to Jonathon, but he stepped away. “My wife’s already gonna kill me for blacking up my white t-shirt.”

Milk with a dropper.

It looked like the kitten was ours to deal with. It was a calico, which are only female, and she couldn’t have been more than a couple days old. No umbilical cord, but her eyes were tight shut. We took her back to Dad’s and fed her some milk from a dropper. We made some calls to shelters, vets, animal control. We drove her out to the Human Society, but they didn’t have any nursing mothers there, so they said they’d likely euthanize her. This sad little kitten had worked so hard to stay alive, that wasn’t a possibility we could allow, so back to Dad’s we went, stopping for kitten formula and bottles on the way. We had a little knowledge about pets as recently we had decided to get a pet ourselves and had gone through a few websites for abyssinian guinea pig information as it was the cutest pet we could imagine adding to our family.

Starting to get the hang of it.

Dad found us a shoebox, and we were able to get some of the formula down her. With her tummy full, she burrowed into my neck and purred. The kitten had Kate at first mewl. For me, it took that purr. I was quick to point out all the practical reasons to NOT have a newborn kitten in our charge, to NOT take a cat along with us on our year of traveling. We can’t leave this creature for more than an hour the first few weeks. And after that, we still can’t leave it behind in Bessie in the summer unless it’s plugged in with air conditioning on. And a litter box? Where’s that supposed to go? We’ve somehow managed to keep Bessie from smelling like a dog, but cat pee smell is impossible to get rid of. 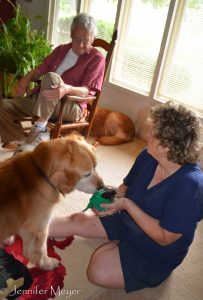 I knew though, that all my yammering was useless. Kate had that new mother look in her eyes, and I was secretly smitten. When something so tiny, so helpless depends on you for its life, how can you not fall in love with it? I still maintain that if we happen upon a nursing mother cat, with owners who are willing, it would be best for all to adopt her out. But for now, we are in the ring.
Once we got the kitten fed and curled up in the shoebox, we said our goodbyes to Dad and his neighbors and hit the road again. We drove to a campground in North Missouri and stayed there two nights, so we had a full day to just hang out in peace and quiet and figure out how to best care for our new charge.

Feeding time is always a struggle. She cries and flails all four paws as if her life is in danger. We learned to bundle her in a cloth and lay her on her back, but even then she fights it. Sometimes she gums the little bottle’s nipple, sometimes yanks her head from side to side. But when she finally latches on and sucks, it’s a moment of bliss for all of us. Afterwards, her body relaxes, she does that loud purring that snagged my heart in the first place, and stretches contentedly. She never seems to drink very much, but I guess it’s enough. We’ve read it’s better to underfeed than to overfeed.

Then there’s the elimination issue. A mother cat will lick a kitten’s bottom, triggering elimination, and tidily dispose of pee and poop. Without this, a kitten will get constipated and die. Peeing doesn’t seem to be a problem, and we’ve learned the hard way to pick her up after a nap with a cloth. But for pooping, Kate rubs the kitten’s rump with a warm, wet paper towel. Works like a charm, and I think it’s a job best left to Kate, who’s less squeamish than I.

In what would become her favorite spot.

We’ve now had this wee one three days. The last two nights, she slept all the way through. We still haven’t named her. Maybe we’re both reluctant to do that until we know for sure she will make it and we will keep her. But some suggestions are: Hobo, Axel, Diesel, Ace, Monaco (Coco), Serendipity, and Journey. We could name her Johnny or Jonatha after the cute kid who was so determined to get her safe. But for now, we’ll just keep calling her kitty and doing our best to tend to her physical needs.

Last night, after her bedtime feeding, she looked so content on Kate’s chest, purring and yawning, stretching one arm out. We haven’t had a kitten in about 15 years, and I’ve got to say, it’s pretty fun. Bailey is perturbed by the whole thing. She frets when the kitten cries, and she’s not eager to get too close to her yet. But Bailey’s got such a gentle temperament, we’re hoping they’ll seriously bond when the kitten is bigger.