Jennifer Meyer June 1, 2016 On the Road, Uncategorized No Comments 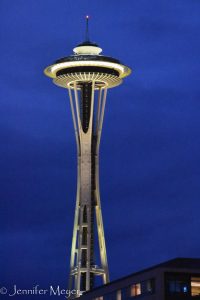 Our journey started in Seattle, really. Twice. We bought Bessie in Marysville, north of Seattle, and drove first to Whidbey Island where we stayed overnight with friends, then to Seattle where we parked in our daughter’s driveway for the night. (See We’ve Got Her!.) Four months later, when we officially started our trip, we drove back up to Whidbey and Seattle to visit our friends, daughter Tobi, and goddaughter Aly before heading off for the year. (See Whidbey Island.) We’ve still got a month to go, but coming back to Seattle was like coming round full circle.

When we got close by, Tobi offered up her driveway again. She would be busy working during the days, but if we wanted to stay three nights, we could come to a show on Friday where she would be doing a little stand-up comedy. That was worth sticking around for.

A year ago, Aly was living and working in a Seattle hostel. After graduating high school, she joined a “work-away” program and worked on a horse farm in California, then an alpaca farm in eastern Washington. When she’d had enough of the country life, she made her way to Seattle. 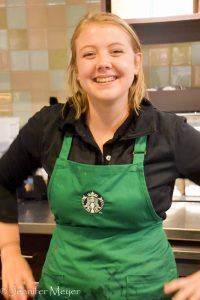 Now Aly is a Starbucks barista and is going to college on a full Pell scholarship. Our more-than-a-goddaughter has made her way through this world much on her own, and we are so proud of her. We picked her up at Starbucks at the end of her shift and drove to the University district, where she lives in a house with nine other women students. She introduced us to a few of her housemates, and we walked up to a main drag. The streets were teeming with activity, but we found a quiet Greek restaurant with excellent food.

We’d seen Aly twice on this trip – once in California and again in Texas. But it was wonderful to see her again, to see where she lives and works, and get a sense of her everyday life.

Our first evening in Seattle, after getting Bessie settled in the driveway, we took Ronan, Tobi’s partner, and picked Tobi up at work. Tobi is Communications Director for the End AIDS in Washington program, which runs out of the Gay City health project office. Tobi started this job in the fall, so it was exciting for us to see where she worked. We then went to dinner at her favorite Mexican restaurant.

On Friday, we came back to Gay City to come to the Trans Night Open Mic event. Tobi was one of three featured performers, and about a dozen others signed up for a five-minute performance. It was a small venue, but it was packed, and we got there over an hour early to get good seats. There were a wide variety of performances: poets, musicians, storytellers, comedians. Tobi has a great stage presence and got people laughing about an upcoming ballot measure in Washington that would require public schools to ensure that trans people use the bathrooms aligned with their chromosomes. Anybody traumatized by a trans person found in the wrong bathroom would be compensated $2,500. An utterly ridiculous proposal, but Tobi offered herself up as an easy money-maker. Anybody willing to accompany her into a school bathroom and then cry foul could split the award. She figured she could match her annual salary within a month.

We loved seeing Tobi again, especially in her own environment. Before we took off the next morning, we went out to a delicious gourmet brunch with Tobi and her friend, Hollis, who was visiting from Olympia. It’s a special moment when your kid offers to split the tab on a spendy meal, even if you turn them down.

We were driving on a freeway in Montana, no other cars in sight, when we heard a loud WHAP against the windshield. We both yelled the F-word at the same time. There was no mistaking the silver dollar sized crackle in the glass. We’d just had the windshield replaced in December. Three days in a repair shop, $7,000 insurance claim with a $500 deductible. F$&% is right.

As soon as we got to Seattle we took Bessie to a glass repair shop. We’d hoped it could just be repaired, but the technician took one look at it and shook his head. Too deep. The windshield would have to be replaced. But he assured us it should be fine until we get back home in July.

In Leavenworth we’d noticed the air conditioning on the CRV had suddenly stopped working. We hadn’t used it since before the Rockies, but it had finally warmed up enough to notice that only hot air was blowing out of the vents. I found a great shop not near Tobi and they squeezed me in on the Friday before Memorial Day weekend. They found a small rock embedded in the car’s grill that looks like it had punctured the compressor. It would take all day and $500 to fix. We decided to hold off until we got home.

I’ve already sent off my camera and 18-200 lens for repair. And now my laptop case has broken and the fan’s not working properly. The laptop still works, if I open and close it very carefully and don’t work on it long enough to overheat it. It’s still on extended warranty, but a repair requires sending it away for weeks, so like with the RV and the car, I’m hoping to limp along with it until we get home.

Gypsy is not an urban cat. She’s been all over the country. Has walked on beaches, in forests, lakeshores and mountains. Wherever she goes, she gets attention for being a cat walking briskly on a leash, keeping pace with the dog. If it’s not too hot, she can easily walk a mile or two with us. But cities are another matter. 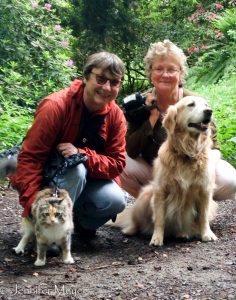 Walking in the arboretum.

Tobi lives in the Central District, which is relatively quiet, but even the traffic on those narrow residential streets was too overwhelming for Gypsy. Our second day there, we drove to a nearby park on Lake Washington and walked on a sidewalk along the shore. But it was too much. Waves splashing against the breaker walls, saws and nail guns from nearby construction, trucks on the main road. Even the sky was noisy. Jet planes low from the airport and thrumming helicopters. It wasn’t a stretch for me to empathize with my nervous cat. I don’t really like cities myself.

The third day we took the kids to the Arboretum and that was delightful. The sky was still noisy, but there were miles of paths through lush gardens and very few people. Gypsy was able to walk without fear, scrambling up tree trunks at will. We spent a good two hours exploring the park, and twice people asked to get a photo of us, so taken were they with our unusual strolling family. 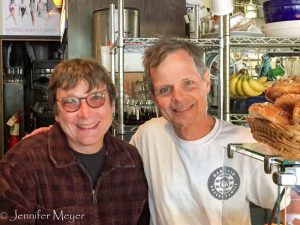 This café near Lake Washington is owned by the brother of my college roommate, whom we visited in St. Louis (see Friends in St. Louis). I’d never met Dick but told Sooze I would go by and say hi. It’s a large, comfortable neighborhood café and bakery with a great breakfast and lunch menu. The timing wasn’t right for us to stay, but we introduced ourselves to Dick and got croissants and lattes to go.