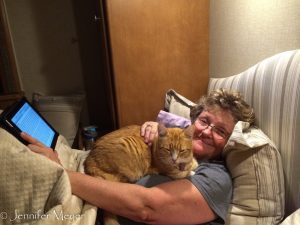 Kate gets a snuggle from Sammy, Tobi’s cat.

It’s early morning dark, and I’m propped up in bed after our first night’s sleep in the RV.  We’re in Tobi’s driveway in Seattle, and the driveway wasn’t level enough to get the automatic leveling system to work, so Kate keeps rolling to the edge of the bed then wriggling back to the middle. But all in all, it was a decent night’s sleep. We’ll sleep even better when we get our own comfy mattress in here. One of the draws of this coach is it’s true-size queen bed. Unlike most RVs, it’s not shrunk down, so we should be able to swap out this hard no-frills mattress the comfy pillow top we just bought for our bed last year. When I’m all snuggled and cozy in our bed at home, it’s been fun to think we will be sleeping in it all over the country, our own little magic carpet.

Today we’ll drive five hours home to Eugene (make that seven hours in RV time). But it’s a straight shot down I-5, so I’m optimistic that it will be easy. At least less traumatic than getting to here. I’m seriously hoping that my RV road confidence will show its face soon, because right now I’m considering anti-anxiety medication.

We got a three-hour orientation at pick-up.

We flew up to Seattle Friday morning and were picked up by Jim, our RV salesman, and driven to Roy Robinson’s RV in Marysville. Five hours later, I was behind the wheel of this beautiful behemoth, driving her into rush hour traffic in the dark. We were expected at our friends’ house on Whidbey island for dinner, which meant either a two-hour ferry wait or a drive north, taking the narrow bridge over Deception Pass. I chose the latter, lured by fewer brake lights in that direction. 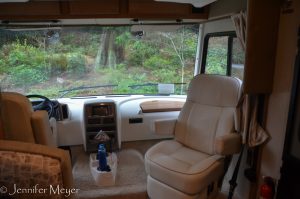 Respite from a harrowing drive.

I probably should have let Kate drive. She does most of the driving at home and is definitely the more confident driver, but I thought I might be less nervous being in control. Thank god the snow that had blanketed the island all week had just melted and the rain had not yet started. But traffic was steady, and when we left the freeway for the two-laner, my hands were gripping that wheel like a lifeline. Between the blinding stream of headlights coming at me, the line of impatient drivers behind me, and the narrow road, I had to remember to breathe… And unclench my aching butt muscles. But two hours later, we pulled safely into Claire and Marsha’s driveway and fell into their welcoming arms. A delicious dinner waiting for us, and a restful night in our “honeymoon suite.” (We were married at their house just over a year ago.) 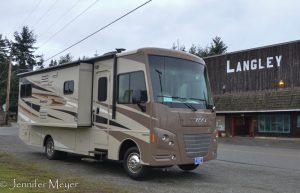 The interior with the slides extended.

The next morning, we drove to a flat spot in town where we could level the coach, extend the slides, and give our friends a proper introduction. Then we slid onto the ferry (easier and cheaper than I expected) and headed to Seattle, where our daughter was waiting for us.

Well, she wasn’t exactly sitting at home warming the tea pot. She called from a protest march in her neighborhood. “The protesters are blocking 26th Street,” she said, and they’re headed downtown, so you don’t want to take Yesler. Come on MLK instead.” There were a few hundred, she estimated. Peaceful so far. Still.

I’m proud of Tobi for standing up against police brutality and racial targeting, and at another time, we would have joined her, but I can’t say this news didn’t give me pause. We routed Siri in a different direction, and she led us off the freeway to a narrow road, right to an old bridge with a sign that said “limit – 9’0”. Yikes! We didn’t know how tall our RV is, but we were pretty sure it was taller than that. (12’2″, we learned.) Kate was driving this time, and thank god she had her wits about her and pulled into a little mudhole of a turnaround lot just before the bridge. (Here’s what happened at that same bridge a few years ago with an unlucky bus driver: bus crash.)

Settled for the night in Tobi’s driveway.

Our improvised back route took us on some narrow neighborhood streets with roundabouts. But Kate maneuvered the rig beautifully, in spite of the gasps and dash gripping coming from the passenger seat. And somehow, she angled into Tobi’s driveway on a street lined with parked cars. Whew!!!