Jennifer Meyer November 26, 2015 On the Road, Uncategorized No Comments 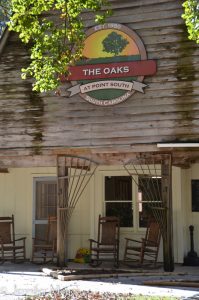 Maybe it was that we had just left behind an idyllic day at my new favorite campground (Huntington Beach). Maybe it was the weather shift from sun the day before to pouring rain, and now an oppressive gray. But when we pulled into The Oaks Thousand Trails park in Yemassee, South Carolina, I had a bad feeling in my belly. The campground was a cramped bark-o-mulch parking lot weighted with an inch or more of standing water and lake-like puddles. Deep gullies where rig tires had sunk in and spun in attempts to escape. Scrawny scrub oaks weeping clumps of gray-green moss. I grew up with Spanish moss in Florida. Hell, I used to make wigs out of the stuff before I learned the hard way about chiggers. But there was something about the wet moss dripping from above that was downright creepy. 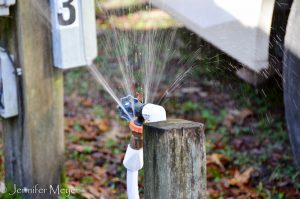 The women in the office were nice enough. They assigned us a spot and said if it was too wet to let them know. It was, and we did. We finally found a site that didn’t have a lake at Bessie’s doorstep and went about setting up. But the water spigot was broken, so that no matter what hose I connected, it sprayed a fountain of water all around, including on our neighbor’s doorstep. Not trusting that we could even find a better space (the place was surprisingly full), we opted to fill up our water tank and disconnect. But in doing so, we overflowed the tank, and between that and the water spray, we created the doorstep lake we had tried to avoid. 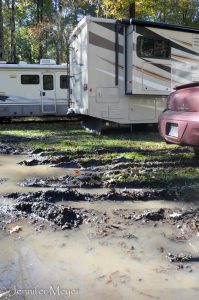 I was so grumpy. The spaces were so tight, we had just a few feet between us and our neighbors. No picnic table or sitting area. Not that I would want to sit outside in the mud, because the mosquitos were so bad that even with bug spray they swarmed us like killer bees when we stepped outside. We just hunkered down inside and put on some music.

Sometimes you just don’t like a place, and it’s hard to tell which influences the other most: the environment or your mood to begin with. Around 4:00, I decided to get Bailey out and try for a better attitude. We took the nature path to the lake. But that wasn’t really helping. I had to slop through ankle-deep water on the trail. And the lake, which looked innocent enough, was apparently filled with alligators and signs warned us away from the edge. Bailey seemed to sense the danger and kept close by me while we walked fast around the lake, coming out at a KOA campground at the other side.

Now that was a nice campground. Spacious and comparatively dry. An old caboose and cable car turned into cabins. A pizza restaurant and coffee shop. They even had a Krispy Kreme delivery while I walked through. I decided to go back via the road, but I got so turned around that after walking this way and that, I finally had to retrace my steps back by the lake at dusk. I returned with a mood no better than I’d left with.

We’d reserved three nights here, thinking we’d save some money, make a day trip into Savannah, do some laundry. But after breakfast the next morning, we made a break for it. The sun was out then, puddles were already starting to shrink, the moss looked less sinister, but sometimes a first impression cannot be shook, and when we drove back out through the gates, we felt like sneaky school kids skipping class, gleeful at the sight of the open road.