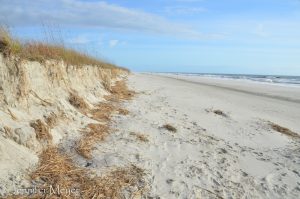 When we crossed over the North/South Carolina state line, I could officially say I have now been in all 50 states. And Kate is only missing Alaska. I couldn’t believe I had left this state for last, because at least what I saw of it, I loved. Starting with the gas prices. (We got 80 gallons at $1.73, our record.) It was dark by the time we pulled into Huntington Beach State Park, but I could tell it was a nice place. At 7:00 that night, it was 70 degrees. We went to sleep with all the windows open, listening to crickets and the sound of the surf. I couldn’t wait to see what I would wake up to. 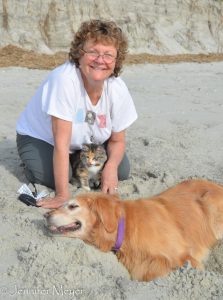 We all loved this empty beach.

I wasn’t disappointed. The park was spacious and well-kept. Green grass, big trees, and a wheelchair friendly boardwalk to the beach. A big rainstorm was expected that night, but it was shorts and flip-flops warm, and we would have this one beautiful day here. We started by walking Gypsy and Bailey to the beach for a little romp. Then Kate and I went on a bike ride, stopping for a “mansion” tour and some wildlife viewing in the marshlands. In the afternoon, we spent more time at the beach with Bailey. Even with the clouds, it was comfortably warm. Heavenly to wade in the waves and walk barefoot in the sand. At dusk, we built a campfire and cooked steaks on the grill, something it hasn’t been warm enough to do for many weeks.

This state park is now one of my very favorites. It’s a hard one to get into, we heard. People book reservations up to a year in advance. Even in November, we were only able to get in without reservations because it was mid-week. I could have settled into this wonderful place for a good long while, but it was booked on the weekend, and with the storm coming, it didn’t make sense to pay $37.50 just to sit in the RV all day, so we headed out at the first break in the rain the next day. 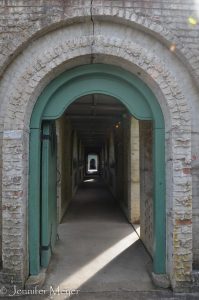 Entrance to the mansion.

Just a short ride up from the campground was the original winter home of this park’s benefactors, Archer and Anna Huntington. This residence was not anything like what you might expect for a millionaire’s mansion. In fact, it resembled prison ruins more than any sort of home. But it was fascinating to learn about these people.

Archer, step-son of a railroad magnate, was a self-educated scholar and philanthropist. Anna, daughter of a professor, was a sculptor. Their main residence was in New York City, but they chose this property south of Myrtle Beach for a winter retreat, hoping the milder climate would be better for Anna’s tuberculosis. 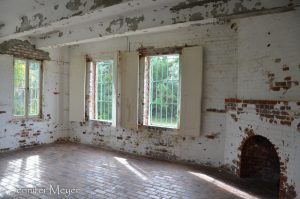 Archer designed the odd, one-story structure to mimic Moorish architecture. Stark brick rooms form a rectangle around a large open courtyard with a tall water tower in the middle. Open-air windows had shutters and iron bars for protection against weather. Anna had both an indoor and outdoor studio for her work. Archer had a library. There were no large rooms for entertaining, because this was their retreat from social life. But an entire wing housed the many servants they brought with them. There were stables for their horses, a fenced yard for their many dogs, and even two bear pens that were used to temporarily house bears or other animals Anna used for models for her sculptures. Each fall, they drove down from New York in their early model RV, packed with their dogs, pet monkeys, and macaws. When World War II started, they vacated the mansion and allowed the U.S. military to use it as a coastal lookout, but they returned for several more years afterwards. 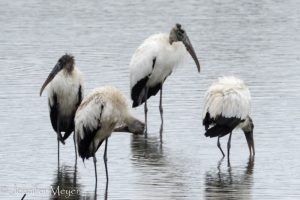 In the summer, this place is filled with all many of tropical water birds, including spoonbills and ibis, and there are lots of causeways and viewpoints for watching them. This time of year, it was mostly herons, egrets, and sandpipers. But they were still fun to see, especially the sandpipers, who sped with pinwheel feet on the beach, chasing waves. On our bike ride across the causeway, we spotted an alligator snoozing just below the bike path. That was enough to make us keep Gypsy on a pretty short leash. When we were leaving the park, a flock of storks flew in for a quick meal. What odd looking birds! We held up traffic so I could jump out of Bessie and take a few photos. 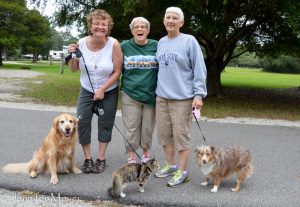 Kate with Pat and Karen.

We came to this place because women we met at the Circle M RV park in Pennsylvania live nearby and recommended it highly. I’d emailed them the week before, asking if they wanted to join us, but never heard back. We were out walking Bailey and Gypsy in the afternoon, when who should walk up to us but Pat, Karen, and their dog Amber. I thought maybe they’d gotten our email and had come looking for us, but they never had seen the email. They just happened to be enjoying a few nights at their nearby state park. They were leaving that afternoon, but we all took a long walk together, and I do so hope we see these two again. 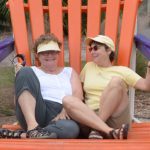