Jennifer Meyer July 31, 2015 On the Road, Uncategorized No Comments 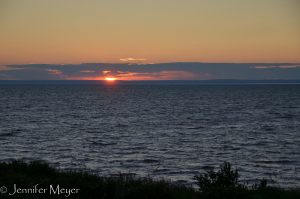 Sunset on the lake.

We crossed over into Wisconsin late in the day and found this little campground in a little town right on Lake Superior. We got there in time to see the sun set into the lake, and we sat for a long time with our feet propped on the dash, watching the horizon grow redder and redder while a crescent moon rose over the trees. It had been a long day, and after taking the weekend off, I had more work to do. I worked late that night, then all the next morning. 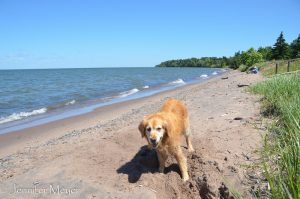 Bailey on the beach.

Before we left, I took Bailey across the road to the beach for a swim. The narrow beach followed the curve of the lake as far as I could see, and if I hadn’t been working so much, it would have been great to take a long walk. The lake was choppy enough to produce waves, and Bailey went into the water several times after the ball, but I could tell she was unnerved by the waves. So after a while she just got busy digging, her second favorite pastime.

There’s not much to say about this short stopover, so I’ll take the time to offer a few answers to questions some people are asking.

Are you still liking traveling?

It’s been almost five months now, and we’re still loving it. We look forward to each new place, and we haven’t had any disasters yet, KOW. Sometimes, when we’re hungry for dinner and still driving and unsure of what’s ahead, things can get a little tense. But so far we’ve always found a place to stay, even though we rarely make reservations and it’s the middle of summer. 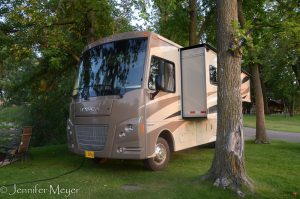 Having Bessie makes all the difference. If we were setting up a tent or lugging bags into motels, I think I’d be ready to be home by now. But wherever we go, we’re home. We can pull into a parking lot, close the curtains, put out the slides, make dinner, take a shower, and crawl into our own bed. But most of the time, we’ve got a great backdrop to enjoy. Oceans, lakes, streams, mountains, canyons… even cornfields. There are so many beautiful places in this giant country and still so many more to see.

How are you getting along?

We’re not sick of each other yet, if that’s what you mean. In fact, we’re doing great. We’ve never spent so much solid time together, but we’re both pretty easy-going and we really enjoy each other’s company. 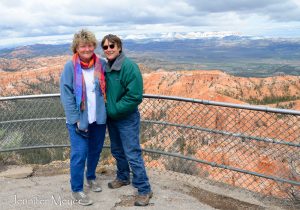 Us at Bryce Canyon.

Maybe it helps that we’re on different sleep schedules. Kate reads late into the night. I get up early and pull out my laptop. We don’t do everything together. Sometimes I’ll go off on a bike ride or hike while Kate stays back to sew. Or she’ll go off exploring a place while I work. And after 33 years, we know each other’s touchy spots. I don’t try to discuss itinerary before Kate’s had her morning coffee. She makes me tea or gives me a shoulder rub when I’m getting stressed about working. But in five months, I’ve never had an urgent need for solitude or space.

We are so in love with her! If you’re Facebook friends with Kate, you’ll see several photos of her a day, each competing for cuteness. We would have taken on this little orphan no matter what she looked like, but she’s growing into a beautiful long-haired calico, with little white socks and white-rimmed eyes. And she is so bonded with us, she’s such a cuddler.

She still eyes solid food suspiciously, but slurps down kitten formula as if her life depended on it, which it does. At three weeks, she started attacking the bottle with claws and teeth like a little rabid monster when she was extra hungry. Sometimes it takes both of us to hold her head still before she calms down enough to suck. But once she’s settled in to a good long drink, there’s nothing more blissful than watching her close her eyes and nurse from the bottle. Takes me right back to early motherhood. Kitten in a camera case.

She’s four weeks old now and is no longer easily contained. She’s outgrown my dad’s shoebox and we use a big cardboard box for night or when we’re too busy to watch her while we’re dealing with Bessie. But mostly she roams the coach freely and we just have to be aware of where she is so we don’t step on her.

With newborn orphaned kittens, you have to stimulate them to get them to pee or poop. Mostly I’ve let Kate handle this area. She will rub Gypsy’s bottom with wet gauze over a piddle pad, and she’ll pee right away. The poops have been much harder to generate, and we’ve had to resort to remedies such as kitty hairball laxative and corn syrup in the formula. Once we even made an appointment with a vet because she’d gone four days without pooping, but she produced it all on her own before we got there. She had her first pee on her own on a piddle pad last night, and soon we will introduce a small litter box. 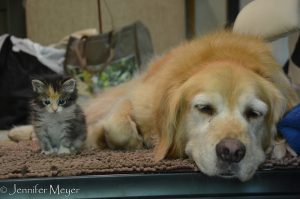 Bailey’s still very nervous about close encounters with Gypsy. She’ll tolerate a little closeness, but if Gypsy tries to climb on her or root about for a nipple, Bailey jumps up and moves away. Once when Gypsy was struggling to climb into her bed for a nap, Bailey nudged her with her nose and helped her in. She was all wags and smiles after that, like she knew she’d done the right thing. But maybe she just prefers the kitten back in the box where she belongs. Bailey is very sweet natured and gentle with small creatures, so we have confidence that in time, these two will be inseparable.

We love not having any set itinerary, just deciding as we go what we will do. But for now we’re exploring the northern Midwest states, and a little of Canada, while we wait to get a date pinned down for Dad’s heart surgery. Then we’ll make our way back to Missouri for that, hopefully in August. Once Dad’s feeling better, we’ll head north again and see as much of the east coast as we can, moving south as it gets colder.