View from the campground.

Our friend Kathleen’s grandniece was named Marais after this northern Minnesotan village, and Kathleen’s sister and her partner sang its praises. It sits way up near the Canadian border, on the shore of Lake Superior. If there was one other place we should visit before we left Minnesota, this apparently was it.

We took them at their word and headed north on Friday, with instructions to be sure to eat at Hughie’s Tacos and stand in line for the World’s Best Doughnuts. There was a municipal campground right in town, and we got the last site available.

The Grand Marais Municipal RV Park is huge and it’s not especially economical ($42-54), but it’s right on the lake beach and a quick walk to the quaint downtown. We got there in time for dinner at Hughie’s Tacos, and Joanne and Larry were right, they were the best tacos I’ve had. Nothing like Mexican food, though. The shells are more like fry bread, and I’ve never had sauerkraut in a taco, but it was so good we headed back there for lunch the next day. 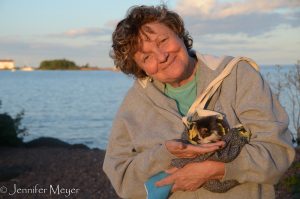 After dinner, we walked Bailey and Gypsy around the campground and although I was first put off by the crowdedness of it – kids zooming by on bikes and skateboards, adults walking dogs, crowds around campfire rings – we were soon won over by the campers. Hands down, this was the friendliest campground we’ve ever been in. Of course, it helped that we were walking around with this unbelievably tiny kitten. We couldn’t get 10 feet without somebody stopping us for a pet, and we’d have to tell the Gypsy story all over again. But honestly, even people who didn’t see the kitten chatted us up. All in this loveable Minnesotan accent that just has the sound of a smile in it, doncha know. We had two couples offer us up driveways in their home towns. 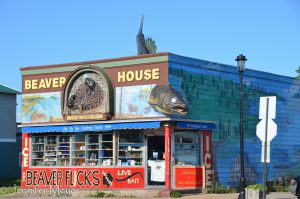 The park had been booked for the weekend, but a couple spots opened in the morning, and we moved to a premium site overlooking the beach. We made our obligatory stop at the World’s Best Doughnut shop (and yes, they were absolutely worth it) and checked out Grand Marais. It’s a very small, hip tourist town. Kind of like the West Coast’s Mendocino. Several casual restaurants, an art gallery, gift shops, and a very authentic old fishing store and one of the last original Ben Franklins. At first we thought, “Nice, but I wouldn’t name my kid after it.” But after even a short while, it grows on you. 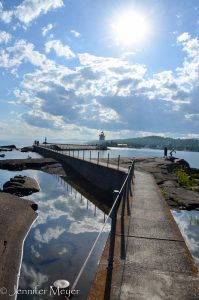 Walk to the lighthouse.

We took a drive north for a hike in a birch forest, ate more of Louie’s tacos, and then, while Kate sewed, I rode my bike around town and walked out on the seawall to the lighthouse, which is one of the area’s main attractions. Because it was Saturday, there was a free concert downtown and I caught part of it, wishing I’d seen more of it.

We were going to leave the next day and find a more economical state park campground, but it was so perfectly glorious when we woke up, watching the sun sparkle on the lake from our front window, we decided to stay another day.

It was no easier to leave on Monday. I wouldn’t mind spending a few weeks in this area. The coastline is beautiful, the hilly roads lined with yellow wildflowers, the towns so quaint and easy to navigate. But other states were calling to us. We headed back down to Duluth, stopping at Brambleberry State Park on the way for a hike along steep coast, and we made it into Wisconsin in time to watch the sun set into the lake.