Jennifer Meyer May 12, 2016 On the Road, Uncategorized No Comments

I met Marianne in the University of Michigan Theatre Department in the 70s. She was a grad student and I was a junior, and I don’t even remember how we met but by the time we both graduated we were very close. We’d been in a theater troupe together, in which we and a dozen others writhed and twirled en masse in burlap gunny sacks while enunciating Yeats poetry, which was weird enough to buy us a trip to Baltimore to perform in the National Experimental Theatre Festival. We started a children’s theater group. And we were both in a lesbian version of “Boys in the Band,” a play about miserable gay men that could no more apply to lesbians than Ben Hur could be played by Geisha girls. You just can’t take dialog meant for bitter, sassy queens and put it in the mouths of flannel-shirt dykes and make it work. But we weren’t really lesbians yet, so we didn’t know that, and neither did the straight male director. We had fun doing it anyway, even if our performance was picketed by a campus gay rights group for promoting negative images of gays.

At any rate, we go way back, and we’ve managed to keep in touch off and on over the years. Through cross-country moves, marriage, motherhood, divorce, and shifting sexual identity, until here we are 40 years later with grown children, legal wives, and retirement accounts. 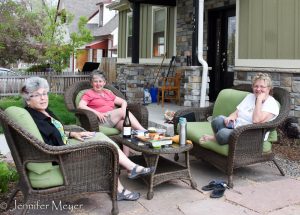 Happy hour on the front patio.

Marianne and her wife, Prudence, recently moved from Oakland, CA to Longmont, Colorado. When we were headed to that state, I asked about a visit, and they eagerly welcomed us to park Bessie in front of their new house and stay in their guest room. When we arrived, Marianne was busy working with a bee keeper to transfer two newly purchased swarms of bees into her new hives. So Prudence showed us around their beautiful new place and introduced us (and Bailey) to their two wire-haired dachshunds, Archie and Contorno (Torny). Bailey fell right in with their little dogs, but Gypsy had to be kept in the guest room for her own safety.

We had planned to stay just a night or two, but Marianne and Prudence were such wonderful , generous hosts and it was so nice visiting with them, we stayed for three. They encouraged us to leave the pets with them and explore the area, and each evening we had dinner together. We were really taken with Longmont, which is just a 20-minute drive to Boulder with a startling view of the Rockies. The town is less pretentious (and less expensive) than Boulder, with a hip and quaint downtown and a nice mix of older homes on tree-lined streets. We could see why they chose this place to retire to. 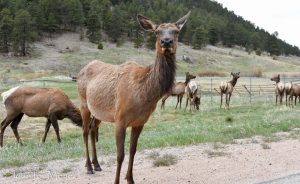 One day we took a day trip up to Estes Park, a pretty western town in the Rockies that is popular with tourists. We had lunch at a tea house, visited the famous turn-of-the-century Stanley Hotel (where “The Shining” was filmed), and drove into the Rocky Mountain National Park to check out views and camping possibilities. On the way back, we had to stop on the two-lane highway for a herd of about 100 elk that were grazing on either side and attempting to cross the road.

My brother used to live in Boulder, and Kate and I have fond memories of the place. Mostly I remembered Boulder’s thriving pedestrian mall downtown with its historic brick storefronts, each block filled with street performers. So when we drove into Boulder one day, that was the main thing I wanted to do: just walk up and down the mall. 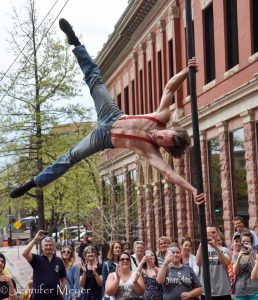 It was a warm afternoon with thunderclouds darkening the sky, and downtown was buzzing with tourists, locals, and families of graduating college students. We walked the length of the mall, stopping for cart food, window-shopping, and street shows. My favorite was a dramatic pole-climber who initiated four strong young men to anchor a 50-foot pole that he then proceeded to shimmy up. He performed various gravity-defying stunts, all with dramatic flair and humor.

Other performers included a young woman violinist, a magician, a country string duo, a man who used leaves to create art on a fountain wall, and an old black man who did yoga poses. I loved the festive, creative atmosphere. But when rain started pelting, we raced for the car and made it just in time. 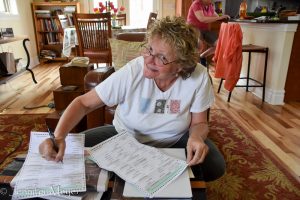 It’s not easy to vote when you’re on the move. Having our mail forwarded while we were gone automatically cancelled our voter registration, so we had to re-register, using our friend’s address in Eugene. Our ballots arrived in Eugene just as we were headed to Longmont, so our friend Kelly overnighted them to Marianne and Prudence.

We have never missed an election, and we surely wanted a say in this one. Ever since seeing Bernie in Savannah (see Savannah post), I’ve been an absolute believer in his vision for this country (and Kate was long before that). Some say the contest is over and that Oregon’s primary will have little effect on the Democratic nomination, but Kate and I aren’t the only ones who believe Bernie still has a good chance. It’s not over till the fat lady sings.