Jennifer Meyer November 30, 2015 On the Road, Uncategorized No Comments 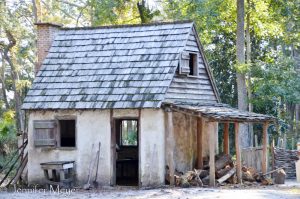 Replica of a colony home.

Savannah was the first British colony in Georgia, established in 1733 by General James Oglethorpe, representing King George III. The intent was to create a buffer between Charleston and the French (in Louisiana) and Spanish (in Florida), which it successfully did. Oglethorpe’s friendship with Tomochichi, chief of the local Yamacraw tribe, also kept Savannah safe from safe from war with Native Americans.

During the Civil War, Savannah was the end point of General Sherman’s famous march of destruction from Atlanta to the coast. Farms, towns, and bridges towns between the two cities were burned, pillaged, and destroyed by both the Union Army and fleeing Confederates. But by the time Sherman reached Savannah, Confederate soldiers had already fled. The unprotected city was spared destruction, and on Christmas Day 1864, Sherman offered up Savannah to President Lincoln as a Christmas present.

We read on our AllStays app that we could park overnight at the Savannah Visitor Center for free. Well, it wasn’t free. It was $8 per vehicle. But that’s still cheaper than a campground. The center is in a relatively quiet area, and close to downtown. There were several other RVs in the lot with us, and it felt quite safe. Trolley tours load up on the opposite end of the lot, so we were inspired to hop on one for an introduction to Savannah. The 90-minute tour we took was well worth the $17. We got to see all the popular high-points of the city and learned many interesting tidbits of information. 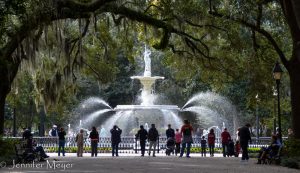 The next morning, we went back and visited some of the spots we’d seen from the trolley. We parked on Jones Street and walked with Bailey through a beautiful oak-canopied neighborhood of centuries-old homes, ending up in Lafayette Park, which was full of people and dogs out enjoying the warm, sunny Saturday morning.

A farmer’s market was set up in the park, and we bought fresh-picked pecans for Thanksgiving pies. There’s was a rugby tournament in an adjacent field, and we stopped to watch a game. I’d never seen rugby played, and I was intrigued. Teams started the game with what looked like a group hug or prayer circle that morphed into a roaring mass of testosterone. 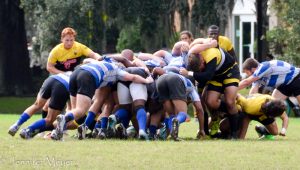 Rugby is similar to football in that there are goalposts that each team tries to get the ball through. But to an outsider, it looks like a giant free-for-all. Players wrestle each other for the ball, pushing and grabbing and smashing into each other, all without the protection of helmets or pads. Instead, they wear little shorty-shorts that look like Tom Sellick in the 70s. When a player hits the ground with the ball, everyone near piles on in an orgy-like heap.  In fact, for all the dramatic display of machismo, this game seems designed to provide the most skin-to-skin contact possible between players. Even their impressive gymnastic moves of lifting a player high in the air to catch a ball involved butt-grabbing. 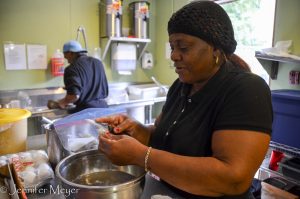 For lunch, Kate searched Yelp for a good, inexpensive place and found Narobia’s Gravy and Grits. It was in a non-touristy neighborhood, frequented by local African American’s, and came highly praised. It was a small, casual diner with bustling cooks in the open kitchen. Everyone there seemed to know each other well, and we felt slightly out-of-place as white tourists, but we weren’t the only ones. The food was cheap and good, and the experience authentic. We even got invited back by the owner for a free Thanksgiving breakfast.

Cut by a Refugee

I made a promise to only get my hair cut at barber shops this year, and to try to find interesting traditional shops with striped barber poles. We found a good one in downtown Savannah, and this one had a woman barber. 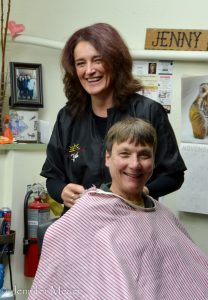 Satcha, my barber, was from Bosnia. And when I asked her questions about the war and how she came here, she told me her story in detail. She and her family stayed in Bosnia for the first two or three years of the war, until her mother’s house was bombed while they were in it. They escaped unharmed and got to a refugee camp, where they stayed for two years. At first, the camp was a large building where everybody just staked out space on the floor. Later, families rigged up some makeshift walls for a little privacy.

Satcha was pregnant when they arrived, and after her daughter was born, she and the baby were moved to a different refuge for women and children. Her husband had to stay in a camp for men. It was two years before their paperwork was approved for a move to Chicago, and from there Iowa. Her daughter is now in her 20s and still lives in Iowa, but Satcha and her husband moved here for the warmer climate. They all consider themselves Americans now.

With so much controversy about Syrian refugees right now, this was a timely discussion for me. After the attacks on Paris, I wasn’t sure how I felt about opening our doors to an influx of Syrians that might possibly include an Isis terrorist. But I was moved by Satcha’s story, and it confirmed for me my initial belief that we cannot turn away desperate refugees out of fear.

On Sunday, we drove out to a plantation we’d heard about near Skidaway Island. This is not your typical antebellum plantation. There’s not even a mansion to tour. Wormsloe Plantation was built by Noble Jones, one of the original colonists sent by Britain to set up the first Georgian colony in Savannah. 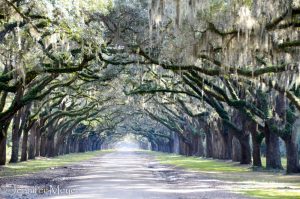 The trustees of this colony provided transportation, land, tools, and supplies to 35 British families with the intention of creating what might have been one of the world’s first sustainable co-housing communities. It was a bit of an experiment, and the trustees had strict rules for its citizens. Slavery and alcohol were prohibited, as were lawyers (a waste of energy) and Catholicism (to keep Spanish from relocating from the South). Responsibilities were shared and resources pooled. But illness quickly overtook much of the population, and several families moved north. Nobel Jones took on multiple roles in the colony, including constable, surveyor, and doctor, but eventually, he and his family were the only ones left from the original colonists.

Jones leased the land near Skidaway and built Wormsloe Plantation, which became a thriving farm. Jones stayed loyal to the British to the end, but his son was an early and fervent Patriot in the Revolutionary war.

All that’s left of the original Wormsloe home are some crumbling walls, made of oyster shell and mud. But there’s plenty of history available, including a movie in the Visitors Center and a replica colony house, and beautiful acreage that we could walk around with Bailey.

Kate has been an avid Bernie Sanders supporter since the beginning, and I had been leaning toward him. When we were walking in Lafayette Park on Saturday, we encountered a crew of Bernie Sanders campaigners who told us Bernie was coming to speak the next evening – in an auditorium two blocks from the Visitors Center where we were camped. We’d planned on driving to Lake City, Florida the next day, where we had an RV repair appointment Monday morning, but we decided this was too serendipitous to pass up. We could leave quickly afterwards and drive into the night.

We walked over to the auditorium 90 minutes early and stood in line with hundreds of others. Kate was leaning against a wall knitting, waiting for the doors to open, when a man in a gray suit approached her and asked if she’d like to sit on the stage behind Bernie. She looked at me with a horrified expression, probably imagining her unkempt hair on CNN, but I said, “Hell, yes!” Then Kate, always thinking of others, said, “Take him, too,” pointing to a young supporter we’d been chatting with. So the three of us were escorted backstage, along with about 30 others, and told to leave our bags, turn off our phones, and under no circumstances, take photos once Bernie stepped on stage. 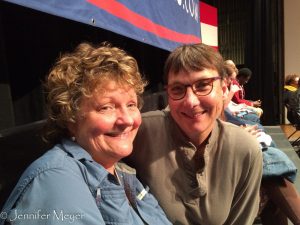 The no photo part was killing me. I’d brought my camera, of course, and was hoping for some good shots of him speaking. But I was trading that for the honor of showing my attentive mug on national media. We watched the auditorium fill to overflowing, and right at 6:00, Sanders came onto the stage.

He spoke fervently for 90 minutes, and the crowd was electric with enthusiasm. Clapping, cheering, and standing after every point he made. Even the Republican woman next to me was taken in, rising and sitting with the rest of us, conceding that she agreed with a lot of what he was saying. 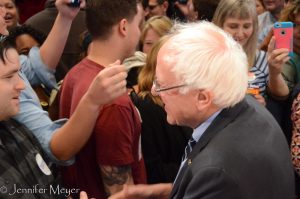 When Sanders finished, he turned and acknowledged us in the stands, then stepped down to the crowd below and worked his way across the front row, shaking hands, posing for selfies, accepting hugs, and generally soaking in the love. At this point, I couldn’t take it anymore and pushed my way out of the stands on onto the stage, where press photographers were getting shots of Bernie working the crowd. I had my camera and just tried to blend in with the media. Mostly, I got poor shots of Bernie’s bald spots, but at least I got a few photos to remember this evening by.

In 2008, I was a Hilary supporter until I saw Obama speak in Eugene and got to shake his hand. After listening to everything Bernie had to say, I found myself throwing strategy to the wind and putting my support where my heart is. There isn’t one point Bernie made that I don’t whole-heartedly believe in. It might be a long shot, but he’s got my vote.