Our year-long trip was conceived as an escape from career burnout, from that thick fog that descends when your life is spiraling away from joy and even your off-hours are consumed by workplace worries. When all you do, it seems, is get up, go to work, come home, eat a half-hearted meal, collapse in front of the TV, take a pill to sleep, and start all over.

When we drove away in our brand new motorhome, we were giddy with the realization of what we’d just pulled off. For 15 months, we could do anything we wanted: just choose a direction and go. We’d done it. We’d left the rat race behind. 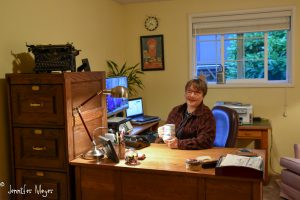 My cozy office on a rainy morning.

It all went by so quickly, and here we are at home again, back in the race. I started my short-term contract with HP in August and have been commuting to Corvallis two days a week, working from home for three. Kate started her training with Hospice in early September and will soon start going out into the field on her own. It’s been hard to adjust to full-time work again, but we are both so grateful to have found jobs we generally like and to have an income again. We look back wistfully on those months of freedom and travel, but now we’re back to reality. And the reality is, to avoid geriatric poverty, we need to work a few more years.

My contract with HP is up at the end of this month. It’s been a comfortable gig. I work on documentation for giant printing presses. My work isn’t exactly meaningful, but it’s something I know how to do well, find enjoyable, and get lots of positive feedback for. The whole time I’ve been there, my boss and others have talked as if my contract will likely get extended at the end of the three months.

Recently I was told that as happy as they were with my performance, my contract would only be extended if I agreed to work onsite fulltime. It’s new company policy since I worked there before. They made a rare exception for my short-term contract but can’t extend it to the long term. That’s two hours of driving, five times a week, to work in a tiny cubicle under fluorescent lights that give me headaches. At a desk I share with a devout Christian who likes to work under the watchful eye of Jesus.

My first response was no way. But at home that night, Kate reminded me of our depleted bank account and all the work we’d planned on doing to the house. In a panic she pushed me to take the job, at least until I could find something else.

For a week I grappled with the decision and the anxiety it produced. It’s not a terrible drive – mostly on an open freeway past green fields and grazing sheep. A friend in the San Diego area reminded me that her daily commute is often over three hours long, in stop-and-go traffic. It’s a standard commute in California. And part of why we moved here from there 27 years ago: to slow down, simplify. 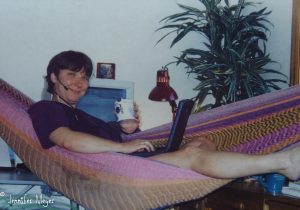 My downtown office, years ago, had a hammock for meetings.

For my entire career, I’ve worked from home or my rented office. I’m a model telecommuter: disciplined, self-motivated, focused, and extremely productive. To shift from a model that works to something I know will be less successful, just to maintain some arbitrary policy change, is ridiculous.

Ultimately, I decided no. That’s not what I want for my life, and what did I learn from our year-plus journey if not to live for now. Life gets shorter every day, and my sister’s cancer is a reminder of how mortality can sideswipe you out of nowhere. I might not be able to do whatever I want, but I don’t need to throw myself into a job that I know will quickly deplete my health and happiness. It’s hard to walk away from a sure thing, but I have to trust that there are better options out there for me. And if it comes down to it, poor and happy trumps rich and miserable any day.

If any of my readers out there know of a good local or telecommuting opportunity for a well-seasoned technical writer, let me know!

3 thoughts on “Back in the Rat Race”