Jennifer Meyer August 28, 2015 On the Road, Uncategorized No Comments

It was hard for us to leave our “best-site-ever” on Lewey Lake in the Adirondacks, but we could only get the space for that one night, so we reluctantly packed up and headed down the road. We stopped at the Adirondack Museum, which is an indoor/outdoor hands-on museum that you could easily spend hours at, but at that point, we didn’t feel like we had hours to spend, so we moved on. 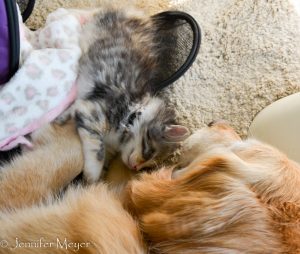 We were a little out of sorts that day. Sometimes it’s great fun to sit down to breakfast and figure out where to go next. Other times, it just throws you to not have plans. Here we were in this gorgeous area, lots of campgrounds around, miles of scenic two-lane highways, and we just couldn’t settle on a direction. We were still waiting to get a surgery date for Dad, expecting to be called back to Missouri in a week or two and wanting to fit in as much as possible. Eventually, we decided to leave the Adirondacks and head into Vermont. We hoped to see some of Maine before returning to the Midwest. 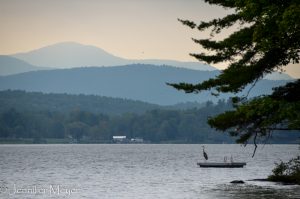 Heron on the swim dock.

It was near dusk when we crossed the border and this was the closest park, so we went for it. It was a four-mile drive down a small country road, past bucolic farms, green fields, wildflowers, alpacas, and the remains of an old slate quarry. The park, it turns out, was donated to the state by the owner of that quarry. In addition to the campground, it includes what’s left of the Village of West Castleton – the slate plant site, historic buildings, a cemetery and sawmill. We got there just in time to pull into a nice, private site, make a quick dinner, and hit the sack. 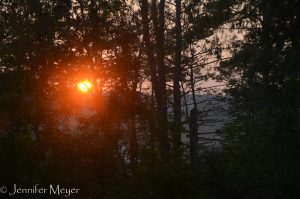 Sunrise through the trees.

The next morning, I woke up in time to watch the sun rise red through the trees, and an early walk to Lake Bomoseen with Bailey started my day right. Determined not to repeat yesterday’s indecisive wanderings, I got online and made reservations at two different campgrounds in Maine. I was pleased with myself, and Kate was, too. But then we got the call from my cousin, and another from my Dad. Finally, they had a date for his surgery. And instead of early September, as we all had expected, it was the following week.

That gave us six days to get back to Springfield, Missouri. Do we have time to go to Newport first? Kate asked. This was the one place on the East Coast Kate really wanted to see. She’d heard about the mansions you could tour – the “summer cottages” of New York’s filthy rich in the early 1900s – and it was on her Must See list. She’s been a great sport about having to hightail it back across the country to sit at my dad’s bedside, and I figured it was the least I could do for her. So I cancelled those Maine reservations, and we headed southeast to Rhode Island.

The drive through Vermont was absolutely gorgeous. Wooded hills and green farms. Sweet little towns with steepled churches and general stores. We passed one such town, Cuttingsville – near Shrewsbury, that we just had to stop at. There was a fenced cemetery just off the road, with a huge marble mausoleum and sculpture, and a stately Victorian house right across from it. 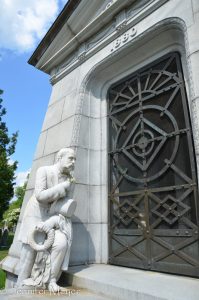 Kate and I love old cemeteries, and this one was exceptionally quaint, with headstones dating back to the early 1800s. The mausoleum, as it turns out, was built by the owner of the house across the road. (Got to love smart phones.) John P. Bowman had made his fortune in the tanning business, but lost his family early on. His first daughter died at four months. His second daughter lived to 23, then became ill and died. His wife followed her within the year.

Immersed in grief, Bowman employed 125 sculptors, marble cutters and other laborers over a year to build the shrine to his family in his native Vermont hills. The life-size sculpture at the door of the mausoleum depicts Bowman himself, bent in grief. Inside are busts of the family members, a marble mosaic floor, candelabras, vases, and a headstone wall. When the mausoleum was finished, Bowman had the house built so he could spend his summers near his deceased family. He died in 1891, eleven years after losing his wife.

I’m not sure how we got on the catalog list for this store, but for years we looked forward to the Vermont Country Store catalog – a small black-and-white booklet on newspaper stock with only hand-drawn illustrations. The store and catalog have remained the same for decades, and the place has now become a popular purveyor of all things retro. 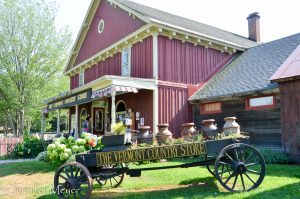 We were just driving along a two-lane highway seemingly in the middle of nowhere when it suddenly popped into view. A large red farmhouse and blackened wood barn, a green lawn cheerfully strewn with chairs and kids’ toys, an ice cream stand, and plenty of parking. I made a fast turn into the lot, we turned on the generator to keep the fur kids cool, and gleefully went to explore the store.

I’m not usually keen on shopping, and we didn’t need to buy anything, but this store is just plain fun, especially for a baby boomer who grew up with all those retro toys: jack-in-the-box, sock monkeys, Slinky dogs, Eight Ball Fortune Tellers, Bozo punching bags, Auto Bingo, Silly Putty, kazoos and zithers… 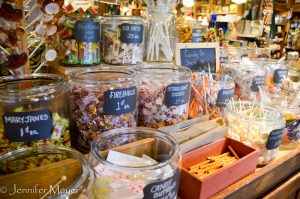 I’m not a big candy person either, but when it’s laid out in front of you for easy picking… well, I went a little overboard in that area. Caramels and malt balls, toffees and coconut chews. Lots of retro candy, too: Laffy Taffy, wax lips, candy necklaces, Mary Janes, licorice shoelaces, and even penny candy.

There’s other food as well, including Charles Chips, which we used to get delivered in a large can to our house. All kinds of jams and jellies and cheeses and crackers. Even Vermont pickled fiddlehead ferns! Who knew? 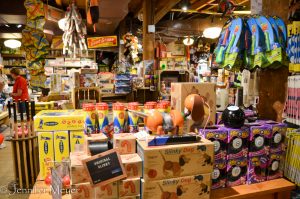 There are soaps and cleaning products, sturdy functional clothing and shoes, flannel nightgowns and cotton underwear, garden tools… a surprising mix of things. We probably spent two hours in that place, and we bought way too much candy, but also got some Vermont cheese, and a Big Ben alarm clock like the one I had as a kid (except you don’t have to wind it and it doesn’t tick the seconds away while you’re trying to get to sleep).

We’d been feeling a little sad about having to leave Vermont so quickly, but a visit to this store made us feel like we’d experienced a quintessential piece of the state.