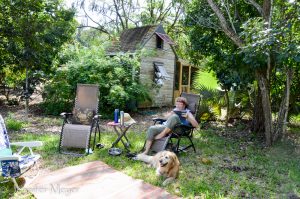 I never got to go to summer camp as a kid, but our stay at Sugarloaf more than made up for that missing experience in my life. It felt like a summer camp for mature lesbians. No campfires and s’mores, but there were jam session sing-a-longs at night, potlucks on Wednesdays, dance parties, kayaking, and plenty of hanging out together.

Sugarloaf Women’s Village started as a sort of lesbian feminist commune in the 1970s, and in many ways it’s stayed the same. Lush acreage off a quiet street on Sugarloaf Key, the village includes four houses, two guest cottages, a “campground,” an outdoor shower under a banyan tree, a chicken coop, and a composting outhouse. Although the structures all sport fresh coats of colorful paint, the interiors include posters and books that immediately bring back the 70s for me.

Activist/author Barbara Deming originally purchased the land in the mid-70s, and when she died in 1984, she left the property to her life partner, Jane Verlaine. When Jane died in 1992, villager Blue Lunden inherited the place. Before Blue died in 1999, she created the Sugarloaf Women’s Land Trust, dedicating the property to all lesbians. Lesbians from anywhere can come visit, staying in a guest cottage or room or camping on the land for $15 pp/night, whether you’re in a cottage, tent or RV. Those who want to stay longer can apply for residency.

We’d been settled in for a few days when we were asked to move Bessie back a few yards to make room for another car in the front lot. We agreed, not really thinking about the fact that it had rained heavily the night before and we were parked on mulch-covered dirt. We closed everything up, pulled in the slides, raised the levelers and backed up. It was when we realized we were now three feet shy of reaching the electrical outlet that we got in trouble. When Kate tried to pull the coach forward, the left back wheel just spun, sinking deeper and deeper into the mulch. 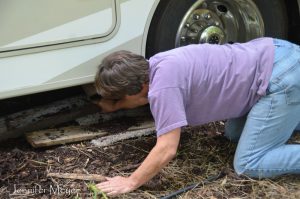 A few women helped us, carrying boards from the shed to put under the wheels, offering support and suggestions. But each time we gave it another try, the wheels sunk deeper. Now there were three wheels stuck, and Bessie was tipped to one side. The others left us to fume privately and try to come up with a solution.

I called our RV’er buddies, Julie and Marc. They’ve lived on the road almost two years now and have gotten themselves out of an embarrassing predicament or two. Marc suggested using the hydraulic levelers to raise the wheels so we could put something under them. Brilliant!

I was just starting to get back to work when Jule, a local snowbird dropped by, and Kentucky Kate (not to be confused with my own Fabri-Kate) came along. These two jumped right in with a fresh heap of get ‘er done enthusiasm mixed with good ol’ butch tenacity. They were going nowhere until our Bessie was on solid ground, and I felt instantly infused with confidence. 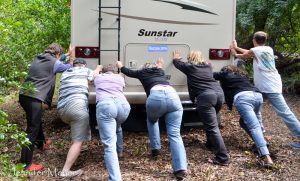 Kate manually lowered the levelers down on boards, and the other three of us got busy digging out an exit path and engineering boards and carpet scraps. By the time we were ready to give it another try, we had a good group of women gathered, and we engaged several of them to help us push the RV from behind. You wouldn’t think seven middle-aged women would account for much when it comes to pushing a two-ton, 28-foot motorhome. But I swear it was the umpf that tipped the scales. Kate had to gun the engine to rock it back and forth. (“It’s all in the rhythm, baby!” Kentucky Kate yelled.) And with one last group grunt, we heaved Bessie forward into freedom. 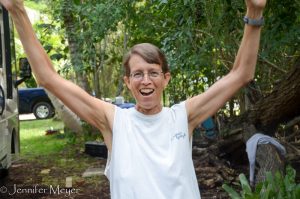 What an incredible feeling that was. We couldn’t have come up with a better team-building exercise if we’d hired an expert. Before this, Kate and I had connected with a couple of women there, but the RV gave us a sense of separateness. Now, with high-fives and hugs all around, we felt more a part of this group than ever.

Thank you, Sky Love, for taking photos while I pushed! As important job as any, and you got some great ones.

Although there was a 30-amp outlet at our site, there was no water or sewer hook-up. We’ve managed to go without dumping our tanks for several days, but 13 days would be a big challenge. It was important that we use our own toilet, because their septic tank and composting toilet were already at capacity, but we could use the outdoor shower, and we could toss our dishwater into the woods. There was a KOA down the road that we could dump at, but after our mud fiasco, we knew that coming and going wasn’t an option. We just used water like drought-conscious Californians, and we squeaked by with tank room to spare.

We’d been there just over a week when our coach surge-protector fried. I don’t think it was a power surge, because our portable surge protector at the outlet was fine. Just some crossed wires, I guess. But we could no longer use shore power. Fortunately, when we first bought our coach, we replaced the two coach batteries with four aluminum glass 6V batteries and with conservative use, these lasted the rest of our stay. 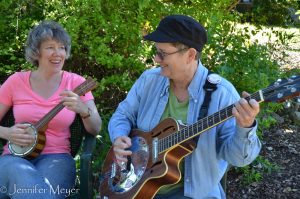 There were about 12 other women staying on the land, with a great hodgepodge of skills and talents. Kentucky Kate and Sara (from Massachusetts) were the village bards. Several nights they pulled out their unique string instruments (a 1930s resonator guitar and a 1920s banjo ukulele). They played oldies that everyone could sing along to. Others picked up tambourines, drummed on a Styrofoam ice chest, or played harmonica. 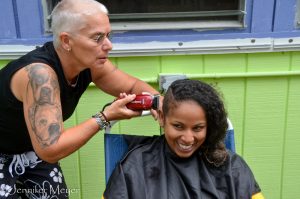 Renny, a licensed stylist from P-town, offered free backyard clips every day, and by the time we left, almost all of us sported fresh cuts that we loved. At one point, we counted 14 “Renny Heads.”

Tammy is a dental hygienist from Virginia, and when Julia lost a filling, Tammy was able to install a temporary filling using tools she’d just happened to bring along.

Kentucky Kate, who is a publisher as well as musician, had undertaken a village project of publishing a book of essays and poems by Jane Verlaine, one of the founders. Sky, Elizabeth, and I volunteered as her typing pool and spent hours retyping manuscripts. 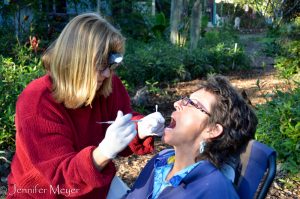 Kate set up shop as the resident seamstress (hence the nickname “Fabri-Kate”). She mended a backpack, a dog jacket, shorts and several shirts. She also made cushion covers for a wicker chair and sofa in the communal house.

I was the unofficial photographer of the bunch, offering portraits and sharing photos from our stay with everyone.

It felt like a taste of the true utopian lesbian village that its founders had envisioned decades ago.

Julia and her partner, Jeanne, stay in one of the village houses every winter. The rest of the year, Jeanne travels and Julia returns to her home on women’s land near Santa Fe. Julia has a catamaran sailboat moored in the Sugarloaf harbor, and one day she took several of us out for an afternoon sail. 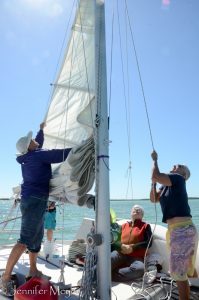 It was a gorgeous, sunny day – after a few cool, cloudy ones, and the water was that turquoise blue that the Keys are famous for. Out on the water, the wind was a little brisk, but the sun so warm. It was wonderful to lounge about the deck while gliding quietly along. We shared talk and snacks and laughs, and in a spot sheltered by an island, we dropped anchor so some of us could jump in the cold water and swim. Kate surprised me by being the one to talk ME into leaping off the boat. (Usually it’s the other way around.) But when else would we get the chance to swim in the Gulf in the Keys, when the water is so blue you want to drink it?

We were grateful to have an affordable place to stay while we visited the Keys, and we did a fair amount of sightseeing in the area (those posts to come), but what we enjoyed most was just being there on the land with so many interesting women. The longer we were there, the more inclined we were to skip going into town or to the beach and just hang out in the village.

I think we might have lucked out and landed here with an unusually compatible group of women, but most I wished I could get to know better. Before we left, we all shared contact info and offers of guest rooms. I hope that somewhere down the road we reconnect.