Jennifer Meyer October 30, 2015 On the Road, Uncategorized No Comments

From Cape Code we headed to Sturbridge, Massachusetts for no other reason than it was in a general southward direction and it had a Thousand Trails campground. The campground was nothing to shout about, but we enjoyed visiting Old Sturbridge Village, a reconstructed village set in the 1830s.

Sometimes a place just feels “off,” and this was one of those. It looked nice enough, with a small lake, large boulders and beautiful trees. But it was haphazardly run. We waited five minutes at the gate for someone to answer our call with a code. And when we went to the office to check in, a surly obese man directed us to an unattractive parking lot of RVs, instead of available lake sites and told us just to pick one. No paperwork, map, printout of rules or anything. There was an indoor pool and Jacuzzi, but the door to it was locked and a sign said it was open by appointment only. The first site we set up at had the 30 amp plug installed upside down; we couldn’t use it and had to move to a different site. Workers were digging up sewer pipes and left manholes uncovered and the road blocked without any warnings.

We’d just stay for two nights, we decided, and go visit Old Sturbridge Village on the day in between. It was frigid cold both nights (in the mid-20s the first), and we were lucky that we’d forgotten to turn on the water after hooking up to the second site, because our neighbors’ hoses all froze.

This was one of those walk-around village museums where people dressed in period costume demonstrate how things were done in the olden days. The village was set up to represent the original Sturbridge in the 1830s, with houses, a church, a school, bank, tavern, and so on. The structures themselves were original, but most of them had been moved from elsewhere.

Kate and I like doing things like this. It was really cold, though, and we didn’t want to spend the whole day there, so we waited until 3:00 to get in for half price, then raced around for two hours to see as much as we could. The fact that it was 30-something degrees out meant we practically had the place to ourselves. But frigid as it was, the sun was shining on ginger leaves, and the place looked magical. 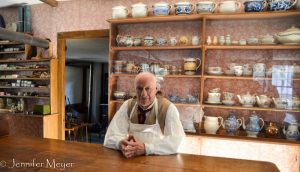 All the houses were furnished authentically, and museum guides in each structure demonstrate skills such as printing or blacksmithing. My favorite was the general store, which was fully stocked with everything from top hats to teapots to nutmeg. I think if I’d lived in that time, I’d like to have run a general store, with shelves and shelves of neatly arranged essentials. Villagers would congregate and ask advice, and I would have just what they needed.

Although we were not pleased with the campground itself, we actually had some nice connections with several people just before we left.

Mark and Saimi Bergmann were parked next to us and were packing up before we started chatting. They are our age and into their second year of full-timing. We clicked right away and had so much to talk about, we held up their departure for at least an hour. They also have a great blog (www.markandsaimi.wordpress.com), and I really hope we meet up again and can spend some time together.

Next we met a petite blonde woman loading a car onto a trailer all by herself. She clearly needed no assistance, but it’s unusual to see a woman our age RV’ing it alone. We struck up a conversation and she ended up postponing her departure as well, so we could let our dogs play in the dog area and show her Bessie. Judy is my age and still working as a flight attendant for United, but arranges her schedule so she can take off for weeks at a time in her RV. She and her husband had planned on an RV’ing retirement for 25 years. Then they got divorced, but she still went forward with her dream, buying herself an RV for her 60th birthday. She brings her bike and her kayak and gets out every chance she can. She’s downsized to an apartment in Newark (convenient to a United hub) and looks forward to moving into the RV fulltime.

As we were leaving, we met an older couple from Pennsylvania who own one of the cabins in the resort. They spend weeks at a time here, where their daughter and her family can join them from Boston. They came and sat at our picnic table and chatted with us as we packed things up.

For a place that we initially wanted to turn around and leave, we ended up having really nice interactions with other campers.