Jennifer Meyer June 14, 2016 On the Road, Uncategorized No Comments 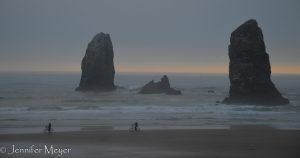 We left triple-digit heat in Portland on Sunday and drove west to Seaside, where the beaches were socked in with fog, the wind was strong, and temps were in the 50s. I had a bad cold and the sudden chill inspired hibernation, so we set up camp and I crawled back into bed. For the next few days, I nursed my cold with weak sun and rest, and we took short forays to nearby towns and beaches.

This is my new favorite Thousand Trails park. It’s right in Seaside, just a short distance to the beach. Flat and open with plenty of trees for shade and wind block. We didn’t even take advantage of the indoor pool/spa/sauna. But the fur kids loved the dog run, which is actually a lush green island with a gated bridge. 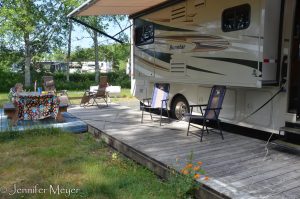 Just as we were pulling in, some friendly people suggested we wait for the spot they were leaving, and I’m glad we did. Site 24 is a former manager’s site in a corner of a loop with a two-level deck and a nice grassy “yard.” The raised beds are now overrun with weeds, but there are still California poppies and foxgloves planted around the deck. This is the nicest site we’ve had the whole trip, and once the sun came out, I was so happy to lie in the sun with a box of tissues and a book. 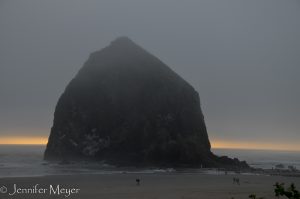 Our first night in, we drove a half hour south to Cannon Beach, a smaller but equally touristy town, famous for its Haystack Rock beach. I wanted to catch sunset at the beach, but the fog came in and obscured the sky. It was low tide, so we walked all the way out to the Haystack and picked our way through tide pools filled with sea anemones.

We’d never been to this town on the northwest tip of the state, so the next day we drove a half hour north to it. It’s an old town, established in the mid-1800s where the Columbia River meets the Pacific Ocean. It was quaint without being too touristy, and we felt welcomed by rainbow flags downtown announcing upcoming Gay Pride Week. We took a tour of a beautiful old Queen Anne style home built by Captain Flavel, a Columbia bar pilot, in 1886. 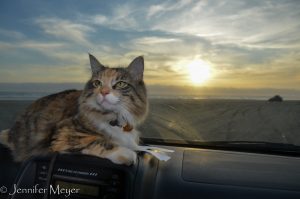 Gypsy likes driving on the beach.

On the way back from Astoria, we followed a road to Sunset Beach and were surprised to find that it dumped us right onto the beach, where cars could freely drive on the packed sand. We’d driven on the beach in Daytona, but I’d never realized there were beaches in Oregon where you could drive. So we parked in the sand and let Bailey run and romp. After dinner, we drove back again for the sunset, this time with both the fur kids. Bailey was in her element, but even though Gypsy’s been to several beach, the steady wind pushed this on out of her comfort zone. It was nice to have the car right there for her to hide in when she’d had enough. 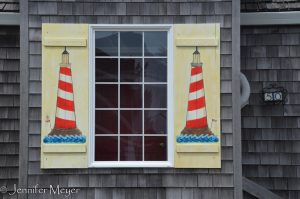 Our third day, we picked up some fresh tuna and chips takeout and went to the beachside promenade in Seaside. It was a beautiful day and lots of people were out, playing beach volleyball, driving pedal surreys, swinging in swing sets on the city beach. We got the bikes off the car and rode up and down the promenade and through the quiet streets, stopping for a swing on a quiet stretch of beach. By the time we got back to the car, the sunshine had been swallowed up by some wild looking clouds, but we made it back to Bessie before the rain came down.

When we walk through a campground with Gypsy on a leash, we get lots of smiles, but we’re also very aware of how vulnerable she is. Every time we see a dog, we’re assessing the security of its restraints. Some curious canines look like they could pull over their owner if they chose to take off. Others are tied up so loosely it wouldn’t take much to snap a branch or rope. 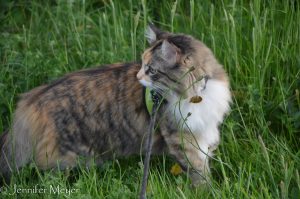 We were almost home from a walk when one of our biggest fears was tested. A Dalmatian broke through an RV screen door and raced out to check out our little cat. Thank god he wasn’t a cat killer, because it only takes a minute for a determined dog to accomplish that. But he charged her barking and nipping. We were batting him away and trying to contain Gypsy. Bailey jumped into the middle of it, and for two or three minutes there was all-out panic chaos before the owner got hold of his dog.

After that, we made sure to bring Gypsy’s sling carrier along on walks and we stuffed her into it whenever we walked by the Dalmatian’s RV. And we’re even more alert now. I can’t wait to get this cat back home safely.