We were driving through upstate New York, when we saw signs for Seneca Falls. That name rang a bell with me: something to do with suffragettes. Kate did a quick online search and sure enough, Seneca Falls is considered the birthplace of the Women’s Rights Movement. There was even a National Park there dedicated to Women’s Rights, and a state park with a campground. Of course we had to stop.

Seneca Falls sits on a canal between Seneca Lake and Cayuga Lake, both of which are part of New York’s “Finger Lakes.” Cayuga Lake is huge and long, and the state park had two campgrounds: one crowded RV park on the lake side of the road and a large, spacious campground without hookups on the other side. The RV side was full, but there were plenty of sites available on the other side, and we were actually happy to be in the spread-out park. It was cool enough that we could get by without air conditioning. To really experience Seneca Falls, we stayed two nights at the park. 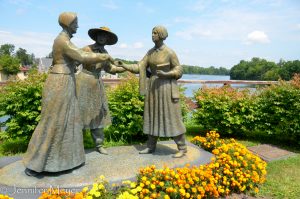 Seneca Falls is a nicely preserved historic town filled with stately brick Victorian houses. It was the home for many years of Elizabeth Cady Stanton, a mother of seven, married to an abolitionist orator, who became a key voice for women’s rights. In 1858, she and a handful of others, mostly Quaker abolitionists, organized a convention dedicated changing the legal status of women. Stanton and Lucretia Mott wrote a “Declaration of Sentiments,” which strongly stated the current conditions that held women in an inferior position and a resolution for change. This declaration, modeled after the Declaration of Independence, was the focus of the convention. 100 of the 300 attendees signed it, including black abolitionist Frederick Douglas. To see the contents of the declaration, click here. 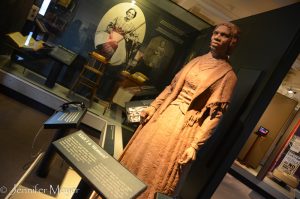 Harriet Tubman: “Ain’t I a Woman?”

Today, Seneca Falls is dedicated to preserving its place in the Women’s Rights Movement. In the small downtown area, the church where the 1858 convention took place has been restored and preserved as a museum, next to Elizabeth Cady Stanton Park. The Women’s Rights National Park has engraved a bronze wall with the text of the Declaration of Sentiments and a list of the people who signed it. A sheet of water flows over the wall, emphasizing the lettering. The park’s Visitor Center offers a wonderful museum of Women’s History, free to the public. We could have spent hours in there, if we weren’t trying to cram so much into the day. 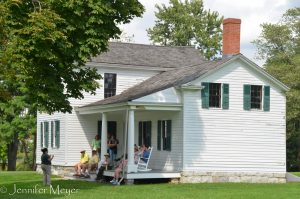 There’s also a National Women’s Hall of Fame, which will soon be moving into the town’s old Knitting Mill. And across the canal is a bronze sculpture depicting the introduction of Elizabeth Cady Stanton and Susan B. Anthony by Amelia Bloomer (known for her introduction of the more freeing “bloomer” style of dress). We visited the home of Elizabeth Cady Stanton, now a museum. And we watched boats going through a lock in the canal.

We toured a large Queen Anne house owned by the Seneca Falls Historical Society. It’s now a museum filled with antiques and items of historical significance to the town. We got there just as it was supposed to close, but the curator was nice enough to give us an hour-long private tour of this large stately home. 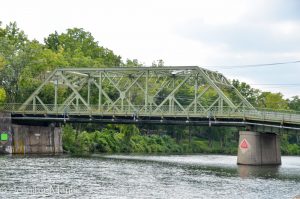 The bridge of inspiration.

Frank Capra was in Seneca Falls when he was developing the script for “It’s a Wonderful Life,” the 1946 Christmas classic starring Jimmy Stewart. It is presumed that the film’s fictional town of Bedford Falls is modeled after Seneca Falls. And a local bridge, which contains a plaque honoring a man who lost his life saving a woman who jumped from it, is likely the inspiration for the end of the movie, in which Jimmy Stewart’s character jumps from a bridge and is saved by an angel. There’s a free museum dedicated to this movie and its local connections, but we didn’t get a chance to go to it.

Concert in the Park 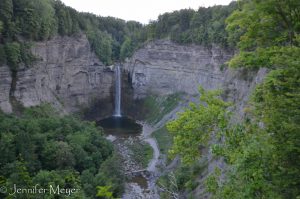 That night there was a free concert in the state park on the south end of Cayuga Lake. After dinner, we drove there, stopping for a quick view of impressive Taughannock Falls. There were probably 250 people gathered there, mostly locals, with picnics and dogs and kids running all around. We brought our lawn chairs and let Gypsy play on a blanket between us. The hot afternoon had turned into a deliciously warm evening, and it was so enjoyable, listening to good music (Indie-folk), watching the sky turn dark and the moon come out.

We had planned to drive straight to the Adirondacks, but I’m so glad we spontaneously chose this little stopover.