Jennifer Meyer July 20, 2015 On the Road, Uncategorized No Comments

We’d driven through this town on our way to Loon Lake and noticed that they were having their annual Pelican Festival that weekend. We also noticed that they had a small city park with campsites. So when we’d had our fill of our “truck stop” camping at Loon Lake on Friday, we decided to head back to Pelican Falls. 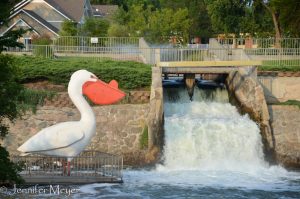 What a find! It’s really a sweet little town. Modest but full of civic pride. Although its population is just over 2,000, it has welcomed refugees and immigrants from around the world, and it is one of the most culturally diverse populations in the state. With the upcoming Pelican Festival, the weekend promised to give us a full plate of authentic small town fun, starting with a pancake breakfast Saturday morning, a classic auto show in the park, a parade, turkey roast, live music, and fire hose fights.

L. Peterson Memorial Park is right in the center of town: a grassy, tree-filled park right on the lazy Pelican River. There are hook-ups for six RVs in a lot at the top of the park, but when we saw the tent sites down in the park, we decided to go without air conditioning to be right on the river. There was no one else in the park, so we nabbed the prime site at the end of a grassy point, surrounded by lagoon-like water. Later, we would share the park with only a couple of quiet tenters on a bicycle trip. It turns out the park is on one of the main bicycle routes across the country. 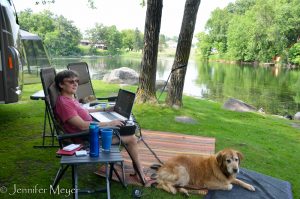 So we settled right in to this quiet, nearly empty park. We put up our screen shelter for evening refuge from the mosquitos we now know to anticipate, set up chairs and tables outside, and I went to work for the day. The weather was perfect, and even though I worked solidly all afternoon, I felt like I was in heaven, sitting in shade on the water’s edge, watching geese and beavers swim by, tossing the occasional ball into the water for Bailey. It was a blissful afternoon.

We had been warned that early Saturday morning, the park would be completely filled with cars from the weekend car show. Sure enough, at 7:45, we were woken by a voice on a bullhorn, directing drivers where to park. When we emerged, the entire park was filled with a stunning array of shiny classic cars. 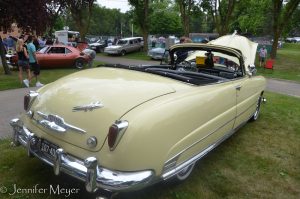 We walked through the car show, over to the nearby nursing home that was hosting a fundraiser pancake breakfast. The food was good, but the ambiance was even better. Sitting at large tables set up outside, we enjoyed talking with older local residents. We learned a bit more about the town. For example, the largest source of jobs in the county is the town’s turkey processing plant.

We’d seen a July 4th parade in Grinnell Iowa that was entertaining only by its laughable tedium. But Pelican Rapids was so excited about their yearly parade, it was impossible not to get caught up in the anticipation of it. Fortunately, there was more to this town’s parade than tractors and semis. There were decorated floats for local organizations and businesses, a small brass band, people in turkey and pelican costumes, Shriners driving tiny cars, even a mayor that was a dog. 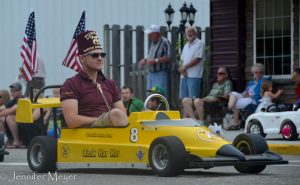 Shriner in a tiny car.

After the parade, we stood in line for the turkey barbecue. The turkey plant had donated 100 turkeys for the fundraiser, and volunteers started roasting them on pits in the park at 4:30 a.m. I must say, it was the best turkey I’d ever tasted, and fun to enjoy it in such a festive place.

Right after lunch, it started raining, and that cleared out the car show pretty quickly. So we hunkered down in Bessie and I went back to work for the afternoon.

The next morning, we drove up to Maplewood State Park, just 7 miles east, because we’d heard it was a beautiful park, and the campgrounds had all been full on the weekend. It’s a huge park, filled with lakes and rolling meadows and maple forests. I was reluctant to leave our sweet little town park, but when we saw we could get a large, fairly private site right on the lake, we nabbed it. I put in some more work time in Bessie, and we packed up later in the afternoon to move.