Jennifer Meyer September 24, 2015 On the Road, Uncategorized No Comments 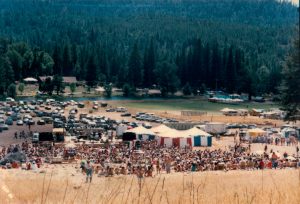 Women’s music festivals have always been an iconic part of the lesbian feminist movement. In the early 70s, they popped up as women-only events at campuses around the country. In August of 1976, 19-year-old Lisa Vogel started the annual Michigan Womyn’s Music Festival (MichFest) with her sister and a friend on remote land in western Michigan. By 1982, MichFest boasted attendance of over 8,000. For decades it was known as the Mother of all women’s music festivals and just finished its 40th and final event this summer. In 1980, Robin Tyler and Tori Osborne started up the West Coast Women’s Music and Comedy Festival. It took place just outside of Yosemite and brought in around 3,000 -4,000 campers each year for over a decade. The Ohio Lesbian Festival started in 1989. A much smaller gathering, it is now in its 27th year and going strong.

Although I was in Ann Arbor when MichFest opened in 1976, I didn’t know about it and never did get back for one. I lived in Santa Cruz in the 80s, though, and attended every annual West Coast Women’s Music Festival until we moved to Oregon in 1990. 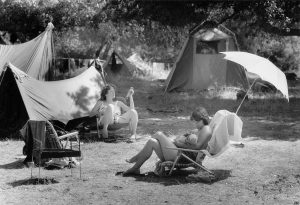 At the Music Festival with 5-week-old Tobi.

It’s hard to relay the experience of these festivals to someone who wasn’t there, but for lesbians who are constricted daily by society’s disapproval (even totally out lesbians who live in a cool place like Santa Cruz), there is nothing like being in the remote countryside with thousands of other lesbians, free to be themselves like never before. It’s an overwhelming feeling, when armor you never even knew you wore begins to melt away. 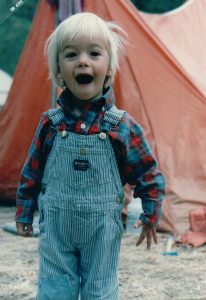 Tobi at the WCWMF at three.

What I remember most about these festivals is the shared joy of self-celebration. And nudity. Unabashed nudity in every size, shape and color that created a new paradigm of body acceptance. Wonderful performances with musicians who used pronouns that spoke to us and comedians who helped us laugh at the very things that normally made us fume. Sleeping in my old orange pup tent and a cheap sleeping bag. Clocking my mandatory volunteer hours in the kitchen. Standing in long lines for rice and beans and craving a little salt. Standing in line for cold showers. Crowds and dust and controversy. Because no matter how much effort the festival put into being politically correct and inclusive, every year there was a revolt by a different faction, which involved meetings and marches and angry speeches. There is no such thing as a true lesbian paradise.

In 1982, Kate and I went to the festival shortly after getting together. The next year, we brought our five-week-old baby – an anomaly back in those days. I strapped Tobi to my bare chest and let her nurse freely. We went back each year until Tobi was five.

We had never even heard of this smaller festival, but when it popped up in a Facebook post when we were preparing to leave Missouri for Maine, we were excited. The timing was perfect and the price was affordable ($90 as opposed to MichFest’s $530-700).

A field of tents.

The drive from St. Louis Friday took longer than we expected, and we didn’t arrive at the gate until 10:00. We were happily greeted by several women and after several chaotic communications over walkie talkies, we were eventually directed to a flat area next to a couple other RVs. We’d missed that first evening’s performances, but we drifted to sleep listening to the drumming and reveling of women down in the party camping section.

The next day started out a little rough. I got myself up early for a yoga class, but the teacher didn’t show. Kate had been thrilled to see several workshops on building tiny shelters for homeless living (a niche of special interest for her). We went to the first, but the leader of those workshops had been unable to come to the festival due to health issues. Another woman tried to fill in, but it was such a discombobulated effort, we gave up attending the others. We did go to a workshop for women thinking about buying an RV. We’re a bit beyond that point, but it was fun to connect with other RV’ers and offer up some of our experience. We were also excited to be able to get mammograms at the mammo-mobile. We’d given up on having them this year, so that was an unexpected benefit. 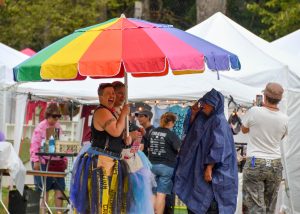 We were just settling in for the afternoon performances, listening to a great duo called Mouths of Babes, when the sky dumped rain in sheets. We were glad to be sitting under the large metal roof, but those who weren’t seemed to be enjoying the relief from the heat. I watched one older woman toss off her clothes and, wearing only a wide-brimmed Aussie hat, dance happily in the rain. One couple walked together under a giant rainbow patio umbrella. Everybody seemed to take it in stride and it only lasted a couple of hours, but when the concert was over, we went back to the RV. We read in bed, listening to the rain, then made fresh pizza for dinner. What a different festival experience with our luxurious traveling home. 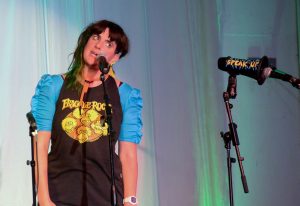 The performance line-up that evening was wonderful: C.C. Carter, Bitch, Barbara Higby, Linda Tillery, and Melissa Ferrick. With a surprise appearance by Ferron, who sold “choice of song” at a between-set fundraiser auction. An exuberant (and flush) fan paid $400 for all of us to hear Ferron sing her classic “Testimony.”

Highlights that night were Bitch leaping around the stage singing “Pussy Manifesto,” an emphatic, comical diatribe that gives the world a new set of rules to live by. And Melissa Ferrick’s sexy, drawn-out, humorous portrayal of the third time she and her lover had sex. If anyone ever wondered, “What’s lesbian music?” Well… that. You won’t find these numbers on local pop radio. 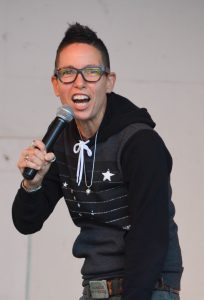 Sunday’s day line-up was also great: Mama’s Black Sheep, Gina Breedlove, and Elvira. Elvira is a Canadian comedian, and she had the audience doubled over in laughter as she ranted about everything from the raffle prizes (wooden ben-wa cubes??) to the stage manager’s plummer-style butt crack we’d been treated to all weekend.

It had been 26 years since we’d been to a women’s music festival. This one was so much smaller than the west coast festivals. More relaxed and less organized. Less angry and more inclusive. (It was controversy over exclusion of transwomen that finally brought MichFest to a close.) 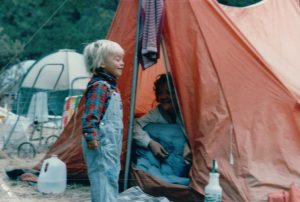 What was most different, though, was us. We’re no longer starry-eyed twenty-somethings defiantly embracing our outlawed identities and charting new ground with lesbian parenthood. We weren’t there with friends, surrounded by familiar faces, beaming with inner circle confidence. And we certainly weren’t camping in a saggy orange pup tent, choking down unsalted beans. But we were just as happy to find ourselves in the country with a bunch of lesbians, enjoying music and comedy and reaffirming who we are.

The world has also changed a lot in these decades. Kate’s and my union is legal now, and that gives me the confidence to out myself to strangers in a way I wouldn’t have before. But we have been traveling all around this country, mostly nameless and invisible, sometimes in less-than-welcoming places, and it wasn’t until we found ourselves here did I realize just how much we needed a good intravenous hit of lesbianous.