We met so many people over the course of our 15-month journey, and a handful of them we’ve stayed connected with over Facebook or email. Caryn O’Conner was one of them. We learned last night that she took her own life on Wednesday.

We met Caryn at the Cumberland Gap National Park in Tennessee. Her Road Trek was parked directly across from our site, and when her little dog, Jake, gleefully escaped at dusk, we helped corral him back into custody. We chatted enough to learn that she had started her own year-long road trip the same time we did. She was from Ann Arbor, where I had gone to college, and she’d been a financial executive for Ford Motor Company for years. She’d had a rough breakup, and she wanted to take some time to herself and travel the country.

The next day was cold and as I sat at my “desk” in the front seat, I had a clear view of her site. All morning, she sat in a chair outside her small RV van in a long plush white bathrobe, smoking cigarettes, hunched over her phone. After lunch, Kate and I went for a hike, and when we came back, Caryn was in the same spot, in her robe. 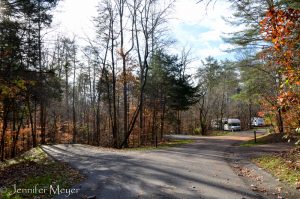 We baked some cookies and brought some over to her. She immediately perked up and gave us a tour of her tiny home. We sat outside and ended up talking for a couple of hours. She petted Jake and fed him a cookie or two while she told us about her life in Ann Arbor, her ex-boyfriend, her decision to travel, all the trouble she’d had with her brand new expensive RV. But in conversation gaps, the light left her eyes and her face grew grim. “I’m sorry,” she said several times. “I’m having a rough time. I’m not usually like this.”

“Do you want to talk about it?” we asked. Kate and I are pretty good listeners, and we felt open to this woman we were just starting to get to know. But she only teared up and shook her head. 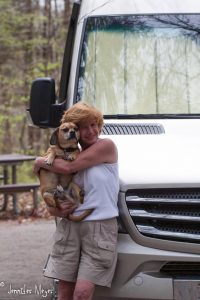 The next morning she was outside again in her robe and we went over to say goodbye. She wouldn’t let me take her photo, but promised to send me a good one of her and Jake that I could include in my blog. We were headed in different directions, but we exchanged contact info and hoped to see each other again.

When Kate and I drove off, we’d forgotten to unplug from our site outlet: a rooky RV’er blunder. As we drove past Caryn, she leapt up and waved at us with uncharacteristic enthusiasm. When we got to the dump station, we saw her running down the road toward us in her white robe, waving and yelling “Stop!!!” Our electrical cord and surge protector were dragging behind Bessie. When she caught up with us, bent over with breathlessness, we all laughed so hard we had to cross our legs, and it was good to see her laugh.

Since then, we’ve followed each other on Facebook, often commenting on each other’s posts. Kate and I had also joined a closed Facebook group she’d started, The Joy Initiative. It’s funny how Facebook can make you feel you know someone. But really, the inspirational quotes, political rants and cute dog videos are only a smokescreen for what lies within.

On Sunday, Kate accidentally pocket-dialed Caryn. She didn’t leave a message, but an hour later, Kate missed a callback from her. Last night, Kate tortured herself with regret. “I meant to call her back, or at least text. Ask how she was doing.” It wouldn’t have changed anything, I assured her. But Kate will always wonder if that pocket-dial was a telepathic signal that she ignored, and if reaching out to someone you barely know really could make a difference.

My heart goes out to Caryn, wherever she may be, and to her family and close friends left to feel the pain and endure her absence. I hope her little pal Jake finds a friend who will love him as much as she did.

One thought on “No chance to say goodbye”