Jennifer Meyer November 11, 2015 On the Road, Uncategorized No Comments 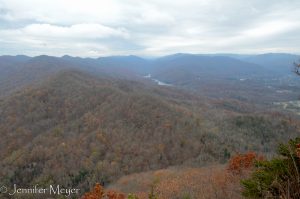 Cumberland Gap is a natural break in the Appalachian Mountains used first by Native Americans and migratory animals, then American settlers (including Daniel Boone) to traverse the mountains. Cumberland Gap National Park sits on three states: Virginia, Tennessee, and Kentucky. We camped in Virginia, hiked in Tennessee, and picked up groceries in Kentucky – all within a few miles.

We missed fall colors here, but it was still beautiful. We camped in the Wilderness Road Campground, the only one still open. I love national park campgrounds. They’re affordable (usually $14-$20), but more important, it feels more like real camping. We’ve stayed at a lot of RV parks on this trip, mostly Thousand Trails resorts, because as members it’s our cheapest option. They are great for suburban camping. There are full hookups, markets and laundromats and often pools, and people are usually very friendly. But there’s nothing like being in the woods with campers whose main goal is experiencing nature. Instead of being nested between 40-foot coaches with satellite dishes, our neighbors were housed in cute little trailers and camper vans, including a teardrop that made us miss ours back home. 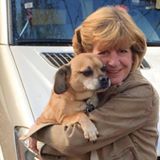 Right away we met our two closest neighbors, both women who were trekking solo. One was an older retired woman from Nashville, who went out for weeks at a time by herself in her tiny pop-up A-frame. The other was a woman closer to my age from Ann Arbor. Like us, Caryn rented out her place back home and she and her puggle (beagle-pug) Jake have been on the road since March. She bought a new Road Trek camper van and has had so much trouble with it that it made us grateful our Bessie issues have been relatively minor.

Seeing Caryn and Andrea (in D.C.) and other women traveling solo across the states has really made me ponder what that would be like. Kate and I face enough challenges on the road as it is, but at least we face them together. I treasure rare times of solitude, and I consider myself self-reliant and independent. Still… I’m grateful that I have Kate to share decisions and joy and obstacles with. And I look with admiration toward the women tackling it alone. 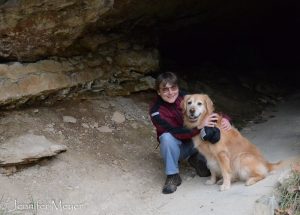 Me and Bailey at the cave.

Our first night at Cumberland Gap, it rained, continuing into the morning. It was nice to hunker down in the quiet forest and wait it out. When it stopped, we took Bailey out for a hike on the Daniel Boone Trail, but it was really cold and we were underdressed, so we didn’t go far. We went into Cumberland Gap, the town, in the Tennessee portion of the park, but aside from a few old buildings, there wasn’t much draw there. A crumbling town attempting to attract tourists but not faring well. We really should have tackled the 3-mile hike to the point where Virginia, Tennessee, and Kentucky meet, but it was so cold, and I’d only brought a windbreaker, so we let it go. 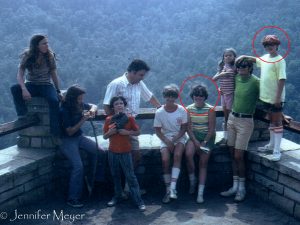 Instead, we drove the windy, steep Pinnacle Road to the highest viewpoint in the park. It was so cold and windy, the parking lot was empty, but we took the short walk to the pinnacle viewpoint and took some photos of the cloudy view. I had a vague memory of coming to this area with my family when I was a teenager, and I have this photo of us with our friends, the Betts, who had moved to Lexington. That’s me on the left. (Was it really a surprise to anyone that I was a lesbian?) But I don’t remember much about our visit, other than windy roads and pretty views.