Jennifer Meyer August 31, 2015 On the Road, Uncategorized No Comments 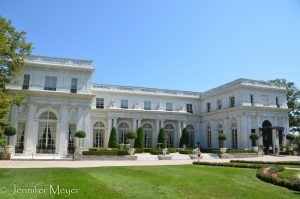 The Great Gatsby was filmed at Rosecliff.

Kate loves home tours, big or tiny, historic or new. When friends told us about the Newport mansion tours, where you can visit up to ten palatial homes from the turn of the 20th century, Kate put it on the top of her things to do this trip.

We’d gotten the call to return to Missouri for Dad’s surgery, so we only had one day to spare. We drove to Rhode Island from Vermont (just a little out of our way) and slept in a Walmart parking lot about 20 miles from Newport. There’s only one RV park in Newport that accepts pets, and we were lucky to get a spot early in the morning. That gave us all day to pack in as many mansion tours as we could. 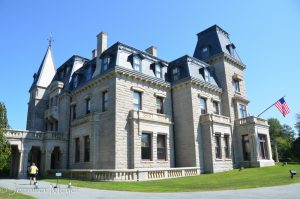 These mansions were built in the late 1800s and early 1900s, and they were the summer homes for New York’s most rich and famous (within the circle of the elite Four Hundred). Ostentatious in both size and décor, millions were spent on these “cottages” that were only occupied six or seven weeks a year.

No photos are allowed inside any of the homes, which I guess is a good thing, because I can only imagine how hard it would be to get through the rooms with every tourist taking selfies and trying to get just the right shot. But without photos, it’s hard to convey just how elaborate, how over-the-top some of these places were. 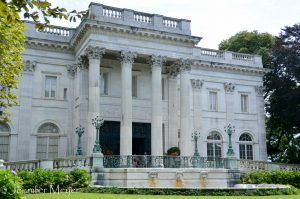 These homes were built by people with money to burn and impressions to make. One mansion was built entirely of marble (500,000 cubic feet of it) and modeled after a palace in Versailles. (It would later host suffragette rallies on the back lawn.) Another had hand-tooled leather walls. Another gold-leaf walls. Painted ceilings as impressive as the Sistine Chapel. Ballrooms as large as a city hall. Many decorated with the original furnishings and personal items.

It’s boggling to imagine such a life, where one’s main focus was to entertain and posture, scrambling for the highest position in society. Many of these marriages were based on economic matches more than romance. As rich as they were, I wonder how satisfying such a life could be. I’m a big “Downton Abbey” fan, and I was equally fascinated by the servants’ side of things. The kitchens where dinner for 200 was prepared on cast iron stoves the length of a porch. The butler’s pantries where food was meticulously arranged on plates and kept in warming ovens until whisked out to the dining room. 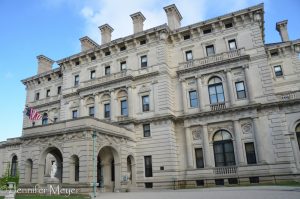 We would have needed two days to see all the mansions, but we managed to squeeze in five of them. We ended the day with “The Breakers,” which is the most elaborate of all of them, built by the Vanderbilts. I was glad we had saved this one for last, because the rest of the homes paled in contrast. It was just crazy over-the-top ornate, but I liked hearing the stories of the Vanderbilt children riding their tricycles through giant rooms and sliding down the bannisters. 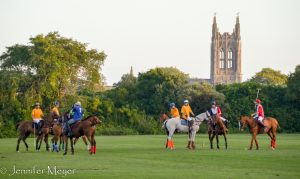 Driving back to the RV park at the end of the day, Kate noticed a field full of horses close by. I walked back with Bailey and my camera to investigate and found myself in the middle of a polo match. It was a practice game, I was told, between the U.S. team and the Jamaican team, and the real match would be on Saturday. I’d never seen polo played and was fascinated by the game. Bailey and I stood on one end of the field and watched the horses and riders gallop from the far end toward us and back again. The ground under us rumbled like thunder with the approaching hooves, and at times I wondered if they would ride right into us. How they manage to hit that ball at a full gallop without crashing into each other or clobbering each other with mallets is beyond me. I was glad to see that at least the horses had padding on their legs to protect them from mis-swings.

Every three years, Newport has what it called “Coaching Weekend,” during which people dress in period costume and ride through town in antique carriages and coaches. As luck would have it, we arrived on the first day of the four-day weekend. But unluckily, we never did see any of the coaches in action. 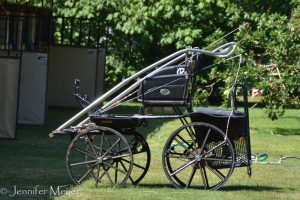 I got as close as allowed to the temporary stables set up behind one of the mansions. I could see a couple of the coaches and watch horses being groomed. And the parade schedule showed coaches starting at 10:00 at The Breakers the next day. We had a big drive that day but wanted to see the coaches first. We got there at 9:30 and we waited with several others until almost 11:00, but apparently they had re-routed and never did come by the Breakers.

That was a disappointment, so to compensate, we squeezed in one more mansion tour before we hit the road.