Jennifer Meyer July 22, 2015 On the Road, Uncategorized No Comments 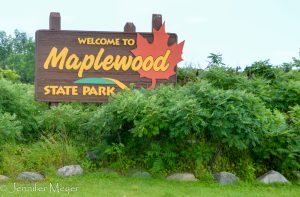 Maplewood State Park is a huge, beautiful park near Pelican Rapids. It’s a popular drive-through in the fall when its maple forests are in full color. The park includes several lakes and lots of campgrounds, but only one of campgrounds has plug-ins. The park had been full when we’d checked for the weekend, but it emptied out on Sunday. We drove up from Pelican Rapids Sunday morning and paid for a great site right on the lake, then moved there that afternoon.

We had just plugged in Bessie and slid out her slides when our phones blasted a tornado alert signal, with a message that said “Take shelter immediately!” A ranger drove through and directed all the campers to the restrooms, and we barely had time to grab our phones, Bailey, and Gypsy. 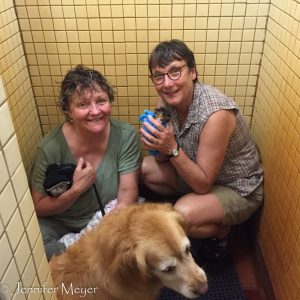 A tornado had touched down just a few miles southwest of us, at Otter Tail Lake, and was headed directly toward us. The sky was ominously dark and rain was just beginning. We got into a stall in the women’s shower along with an older couple and their cocker mix who howled every time thunder crashed. Three terrified teenage girls who were camping alone huddled in the other shower stall, and two more couples hovered near the door.

It was stifling hot, so the ranger propped open the door with a trash can and several people stood under the eaves, keeping watch for a funnel cloud. I stepped outside a few times, and the clouds were intensely huge and dark. At one point, it was as dark as late dusk, as if an eclipse had just wiped away all light. Raining was pouring by then, and between thunder crashes, there was one long thunder roll that never stopped. At first I thought it was the roar of a plane above, but it really was thunder and it lasted over an hour. 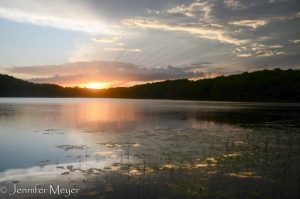 We were in the steamy shower stall for almost two hours. The tornado warning kept getting extended, and the ranger would come back by and update us, show us the satellite clips on his phone. Although the tornado was still very close, the wind where we were never got that bad. Eventually, the sky lightened up and the ranger’s phone showed the worst of the storm had bypassed up. There was still 15 minutes left of the warning, but we took our chances and ran back to Bessie through rain that drenched us down to our underwear in minutes.

We’d had a similar tornado experience near Austin, Texas with my sister and brother-in-law, sitting out a warning at the back of a grocery store. But this one was a lot scarier. We were giddy with relief when it was over, and the sky cleared enough to give us a beautiful sunset. I even got to see my first (and only) Minnesota loon.

Most of the next day, I had to work, but at the end of the day, I got on my bike and enjoyed some of the miles of empty scenic roads through the park. Everything was such a brilliant green, and the rolling hills made for a fun ride. Every direction I looked was a refreshing visual feast, and I felt so lucky to be there. 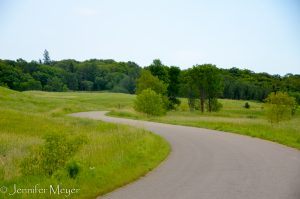 When I returned, Kate had set up the picnic table for sewing and was finishing off several projects she’d started – one of the quilts for Hospice and some doll outfits for our young friend, Madison, whom we would see the next day.

The mosquitos got bad late in the day, but we had our screen shelter. The air was cool and dry, and we ate dinner outside and just sat in our chairs watching the sun set on the lake and enjoying this beautiful place we were in, grateful to be here in one piece and not blown away to Oz!