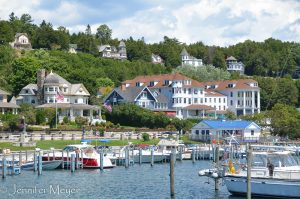 Mackinac Island (pronounced Mackinaw) is in Lake Huron at the top of the Michigan mitten, just by the Mackinac Bridge that crosses the Mackinac Straights to the Upper Peninsula. There’s no bridge to the island, and no motor vehicles (other than emergency ones) are allowed. Instead, the streets are filled with horses, carriages, wagons, and bicycles. It’s a hugely popular summer destination for American tourists. Kate came here with her family with she was 12, and I have always wanted to experience it. 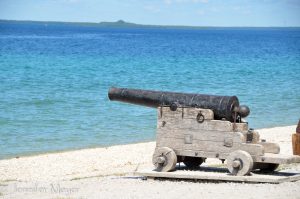 To reach the island, most people take one of the many ferries running from Mackinaw City. (The different spelling comes from its British founders.) So Mackinaw City is a crowded tourist town all on its own, packed with hotels and restaurants, shops, mini-golf, haunted houses, museums. It’s the less quaint sister of Mackinac Island.

We stayed at a campground not too far from Mackinaw City and came into town for dinner. We had both the fur kids with us, so we ended up eating outside at a harbor-side fish eatery, and we both tried “white fish,” the main fish of the Great Lakes. The food probably wasn’t nearly as good as some of the town’s restaurants, but we didn’t have to fight the tourist pack. 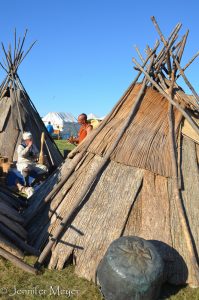 By the harbor was an 18th century trade fair.

By the harbor, there was an encampment of canvas tents and tipis that was an “18th Century Trade Fair” set up for the weekend. People in costume demonstrated blacksmithing skills, smoked fish over coals, and presented their crafts and wares, such as birch canoes and candles. It was Thursday night and not officially open to the public, so it was mostly just the vendors themselves mingling and making their evening meals, readying their tents for the night. We strolled around and attraction children with kitten bait.

We went down to the lighthouse for a walk-around, then caught a gorgeous sunset at a more private beach down a quiet residential lane. The weather had turned from cold and windy in Ontario, to warm and sunny here in Michigan. It was a wonderful end to the day. 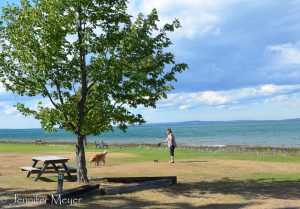 View from our campsite.

We found this RV campground in our Passport America list, which can be hit and miss, but this one was a hit. It’s a small place, run by an older British woman who’s lived on the property for 35 years. It was quiet, pristine, right on the lake, and just had good energy about it. I was happy just sitting outside Bessie and watching the gulls on the lake. It was seven miles to Mackinaw City and well worth the drive to get away from the tourist crowds and have a little peace.

Friday morning we left the fur kids in Bessie and caught a 10:00 ferry to the island. We brought our bikes with us, because riding around the island was the main thing we wanted to do. When we got off the ferry, I was mesmerized by everything around me. The main street was filled with pedestrians and bicyclists, horse-drawn wagons delivering bread and packages, fancy carriages loading up hotel visitors. The buildings were all late 1800s with fresh coats of bright-colored paint. Hanging flower baskets decorated the walks. Blue skies, emerald grass, white sailboats… crazy bright colors. 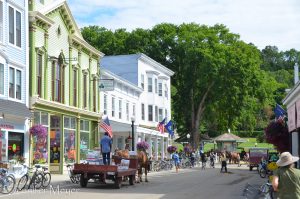 Main Street was a little like Disneyland. These buildings were authentic, but the crowds were similar. There was a chaotic scramble for rental bikes and fudge. I pumped up our tires and we took off on the coastal road that goes for eight miles around the island. Away from the town, it was less crowded but there was no escaping tourists. The scenery was fantastic, and so great not to have to worry about cars. But when you put hundreds of people on bikes, including little kids and many adults who haven’t been on a bike in years, and set them loose on a single road… there’s a lot of careening and crashing. It wasn’t the most peaceful of rides, but we still loved it, even Kate who normally has to be bribed into a long bike ride. 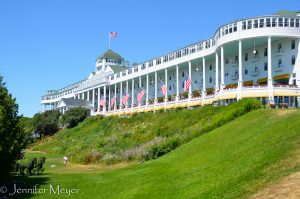 Back in town, we locked up our bikes so we could walk around more freely and go into shops. We walked up the road to the Grand Hotel, which is so fancy that after 6:00 men have to wear suits and ties and women dresses even just to walk on the road. We were safe in our shorts in the afternoon, but we declined paying $10 to see the lobby.

We were on a short leash, never having left Gypsy alone this long, so we took the 2:00 ferry back to Mackinaw City, and honestly, I was ready to escape the crowds. I’d love to stay on the island sometime. In a quiet refuge where you can escape the midday crowds. And if we weren’t in a rush, I’d have found a quiet place to refuel and go see some more. Visit the fort or go to a museum. But as it was, heading back at 2:00 was fine. 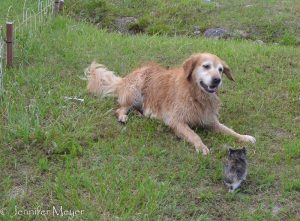 Gypsy and Bailey playing together.

When we got back to the campground, Bailey and Gypsy were fine and excited to see us. We let them both romp around on the lake shore, and Gypsy, who only just recently had mastered walking without tipping over, ran all around the grass, chasing after Bailey. Bailey only had eyes for her ball and plunged into the lake after it. Gypsy followed her right into the shallow shore, not even hesitating when she hit the water. Who knows how far she would have gone if Kate hadn’t scooped her up.

This place is one of my favorite places on our trip so far. I would love to see it in the fall when it’s less crowded, and I wonder what it’s like to live on the island in the winter when the lake has turned to ice. (Only about 500 people do.) I don’t know when we’ll get back this way, but it’s definitely on my list of “get back here again.”