Jennifer Meyer August 15, 2015 On the Road, Uncategorized No Comments

When we were in Mackinaw City, my friend Jane posted photos of a family reunion in Glen Arbor on Leelanau Peninsula. It was one of the most beautiful places on earth, she bragged. She and her family had been going there for years. So Kate and I decided to head in that direction next.

We left Ranch Rudolf after lunch and had just driven through Traverse City when we saw fierce clouds ahead, including something that looked almost like a funnel cloud. Soon after, we were pounded with torrential rain and wind that pushed us into the oncoming lane. We considered pulling over, but we were so close to Sleeping Bear Dunes, the national park where we hoped to camp, that Kate chose to just keep driving. Fortunately, there was no other traffic. In retrospect, that might have signaled something.

The rain stopped when we got to Sleeping Bear, but the D.H. Day Campground was full. The ranger called over to the other park campground, but it was full, too. She gave us a list of other campgrounds in the area. Leelanau Point was one of the places Jane had suggested seeing, and there was a state park there, so we decided to drive up to the tip of the peninsula and hope for the best. 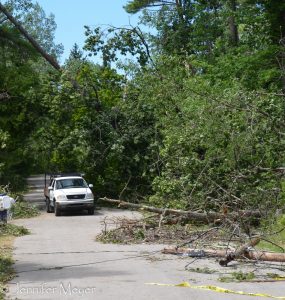 The storm held off just a bit longer, but somewhere between Glen Arbor and Leeland, strong winds hit us. I was driving then, and at one point I yelled, “Jesus Christ!!” Kate jumped and said, “What??” thinking I was mad about something (even though I swear I never yell at her like that). But it was the wind, one relentless gust that would not let up. When we got to Leeland, we saw crowds of tourists rushing to their cars and we passed a wide swath of fallen trees and lines. Like a tornado had just come through. Nothing was blocking the road, so we drove on through just as the rain returned.

We arrived at the campground in heavy rain, but at least the wind had subsided. They were full, too, but they must have felt sorry for our soggy selves, because they offered us an unoccupied host site. We were so grateful, because at that point, we just wanted to hole up and collapse.

The next day, my friend Jane messaged me, sending me a link to an article about the record-breaking storm that hit Glen Arbor. 100 MPH winds had felled hundreds of trees all through the town. All roads in and out were closed. Power would not be restored for days. She and her family had left the day before. She hoped we weren’t in the midst of it.

When we calculated time and location, we determined that the storm hit Glen Arbor just after we drove through it, probably about the time I was swearing out loud. But by the time we got to Leeland, just 15 miles up the road, the storm had already hit there. During the ten minutes of hard impact, we must have been driving just enough inland that we were protected from the devastation. 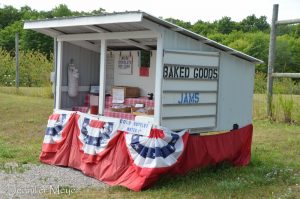 The next day was sunny and calm, and up in the northern part of the peninsula, you’d never know a storm had come through. I decided to ride my bike to the closest town, Northpoint, and Kate would meet me there for lunch. It was a wonderful ride. Up that far, there was little more than wilderness and cherry farms, weathered barns, old farmhouses. I stopped and took photos often and enjoyed the fairly flat, easy ride.

Kate had brought Bailey with her, leaving Gypsy in Bessie, and after lunch, we drove down to Leeland where there was a long sandy beach and water as blue as any Caribbean sea. Kate found a bright turquoise stone, which locals identified as a “Leeland Blue,” a smoothed chunk of slag from the town’s old iron ore smelting plant. We stopped at the town’s historic fishing village, which is now mostly cute shops. 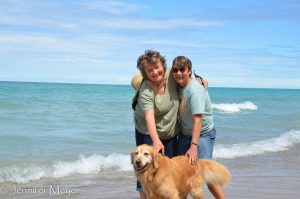 Us on the beach.

The next day, we packed up to go, but on our way back down the peninsula, we drove to Christmas Cove, a locals’ beach that the people we’d met on Leeland beach had told us about. They said it was a good place to find more Leeland blues, as well as the locally coveted “Petosky stones,” which are rocks containing fossilized coral. We found neither, but it was a gorgeous little beach where we met more friendly locals. 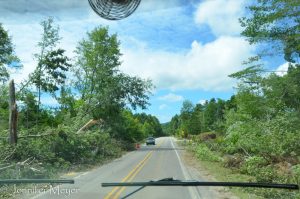 We headed south on the now-open road to Glen Arbor, and as we approached the town, we were sobered by the amount of devastation. Forests on either side of the road were a jumble of felled trees. Nearly every house we passed had sustained some sort of damage. The road was lined with piles of freshly sawed tree trunks and limbs. Chain saw must have roared day and night to get this road cleared, and crews were still hard at work all through town. 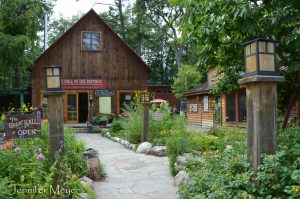 There was no place to pull Bessie over in town, so we drove to Glen Lake, just south of town, and had some lunch, then unhitched and drove the car back into Glen Arbor. The town was bustling with emergency road crews and stunned tourists. There was still no electricity and would not be for days, but quite a few shops were open. We went to Cherry Republic, a popular purveyor of all things cherry, for wine-tasting, soda-tasting, and some cherry pie. We stopped at Petosky Pete’s to buy some small Petosky stones. We were surprised to find that in spite of the devastation, the locals were cheerful and friendly and confident that the town would be put back together quickly.

Highway 22 was still closed south of Glen Arbor, but we wanted to go southeast to see Sleeping Bear Dunes anyway. We’d hoped to at least have a quick look at this nationally renowned park. But the entire park was closed indefinitely, rangers standing guard at every entrance.

We stopped at D. H. Day Campground, and I went in to talk to the ranger. The campground was closed, barred to vehicles, but she seemed eager to talk. She walked me back out to the road where Kate was parked and told me her storm experience. She had been there when Kate and I had come looking for a site and left the same time as we did. Except she headed south, straight into the storm. She said at one point, her SUV was stopped, in park, with her foot on the brake, and the wind still moved her sideways across the road.

She said the campground was a complete mess of fallen trees. It was miraculous that no one was hurt, because trees fell on tents and RVs. In fact, for that whole storm, there weren’t even any serious injuries. It would be weeks before they could get the campground open again, she thought. When she saw Bessie, she said, “Oh, what a beautiful rig. You are so lucky we were full.”

We seem to have a knack for skirting disaster. First the floods and tornado in Texas, then the tornado in Minnesota. Now this. We do feel incredibly lucky. And when we’re not in the vicinity of some dramatic national news kind of weather, we’ve managed to have, generally, really great weather. It’s been like one long five-month summer so far.

Well, we never did get to see Sleeping Bear Dunes National Park, but once again, we’ve come away with a harrowing tale to tell. And we got to experience so much of the beauty of the area. We totally agree with my friend Jane’s assessment.