Jennifer Meyer September 29, 2015 On the Road, Uncategorized No Comments

The town of Hershey.

Hershey’s a lot more than chocolate. It’s a thriving town in rural Pennsylvania with a European styled performing arts center, museums, a giant rec center, stadium, and arena, an amusement park with 13 roller coasters, a zoo, a professional hockey team , golf course, gardens, and a free boarding school for disadvantaged kids that’s the size of a college campus. All thanks to Milton S. Hershey.

We stopped here while heading east because we wanted to see more of Pennsylvania Dutch country, and there was a Thousand Trails RV park nearby. We took a day to check out the town and go to the Hershey Story Museum, and what we learned was both fascinating and impressive.

There were a lot of men who made their fortunes in the early 1900s in unscrupulous ways, and factory workers often got the worst of it. Of course, the town museum is going to paint Milton Hershey in good light, but from everything I can find, this Milton was actually a really decent guy. He pretty much built this entire town, and the townspeople generally revere him.

Hershey grew up right here on his family’s Mennonite farm in what was then called Derry Church. At 14, with only a 4th grade education, he apprenticed with a local chocolatier. At 19, he opened his own chocolate business in Philadelphia, and that lasted six years before he went bankrupt. A year later, he opened a caramel company in New York City, which lasted only three years. In 1886, he returned to nearby Lancaster and opened another company that produced both caramels and chocolate. Third time’s a charm, and this one was a huge success, due mostly to recipes he had perfected that incorporated milk. In 1900, he sold the caramel business at a huge profit, keeping rights to the chocolate division.

Now a millionaire, Hershey returned to his birthplace with his wife, Kitty. This is where Hershey envisioned a milk chocolate factory that would bring the luxury of chocolate to the masses. He bought up land all around his family’s farm and built his first chocolate factory in 1903. The plant used the latest mass production techniques and quickly became the largest chocolate manufacturing facility in the world. 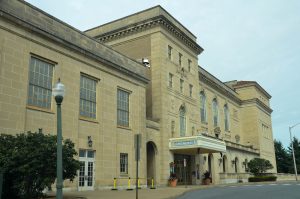 A factory this big needs a town to go with it, and the town of Hershey became Milton’s biggest focus. He studied other company towns, both successful (Cadbury in England) and disgracefully unsuccessful (Pullman outside Chicago). Happy workers was his goal, and a thriving community was his dream. He started with housing, which he offered at low price with low-cost loans, so even factory workers could be homeowners. He encouraged workers to have plenty of recreation, and he built an amusement park, a huge recreation center, a swimming pool, and a zoo. He wanted the town to experience culture, so he built a huge theater, modeled after a European opera house, and he brought in theater, ballet, and opera. He added streetcars and department stores, and Hershey became known as an ideal place to live and work.

Milton and Kitty were disappointed not to be able to have children of their own, so they started an orphanage for boys on the very land that had been the Milton farm. It included a school and vocational training, and children lived in small houses around the school with married couples. The orphanage became a free boarding school for both boys and girls, and now looks like an upscale community college, serving disadvantaged kids from around the country.

Kitty died young from a degenerative muscle disease, but Milton carried on his philanthropic work for the rest of his long life. He put his entire fortune into the Hershey Trust, which continues to fund the Milton Hershey School, as well as numerous other community projects. 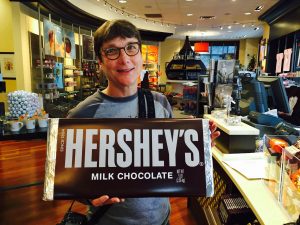 A giant Hershey bar in the gift shop.

We learned most of this from The Hershey Story Museum, which is a beautifully done museum. Well worth the $10 entrance fee. We actually found a Groupon for $23 that included two chocolate “flights,” which are normally $8 apiece. So at the end of our museum tour, we tasted six different warm chocolate drinks from around the world. The drinks were delicious, more like melted chocolate than hot cocoa. And our favorite was Santo Domingo. 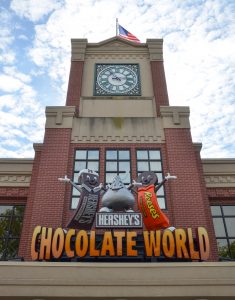 Okay, here’s the tacky touristy part. We went for the free “simulated factory tour,” because I love factory tours and Hershey shut theirs down years ago due to OSHA safety standards. But it was like the worst kind of Disney ride, with singing cows competing with a loud voiceover, creating a racket that made us long for the exit.

The rest of the place was a money maker: a movie theater, a make your own chocolate lab, and a gigantic store pushing every kind of Hershey candy and souvenir /available. Next door was the original Hershey amusement park, now much expanded. For us, the only good thing was that it was off season and nearly empty.