Jennifer Meyer August 20, 2015 On the Road, Uncategorized No Comments

Kate also has a special connection to Michigan. Her grandparents retired here. They bought a house near Tipton on Evans Lake and built a smaller rental house below it, right on the lake. Kate and her family would visit in the summers, and to this day, the scent of mud and diesel fuel send her into a happy place. She remembers sleeping on the screened-in porch on warm nights, and sailing with her family. 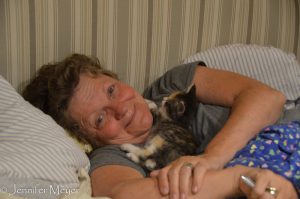 Kate lolling about with Gypsy on her birthday.

On Kate’s birthday, we were scheduled to leave Jackson (near Ann Arbor) and drive towards Niagara Falls. But Evans Lake wasn’t too far off our course, so we decided to go on a mission to find Kate’s grandparents’ house on the lake (after a leisurely coffee-in-bed, Kate-kind of unrushed birthday morning).

The road to the lake was a little tricky in Bessie, but we managed it. Kate drove slowly along the lakefront, studying every house. It had been 40 years since she’d been there, and many homes had been remodeled, so it was hard to know. It was a sweet, quiet neighborhood, with houses on one side of the road, docks and a strip of private lawn on the other. The lakeside lawns were set up with chairs and fire pits, and you could imagine the fun gatherings there on warm evenings.

We were near the end of the road when we saw a man playing in the water with a couple of kids. Kate stopped and said she was looking for her grandparents’ house from years ago.

“What was their name?” he asked, and surprisingly, he remembered them. He pointed across the road and Kate’s face fell a bit when she saw the house; it was the most run-down residence on the whole road. She could recognize it, with some imagination, but the deck was sagging and the paint peeling. This was the rental home her grandparents had built down the hill from their house for income. The people who had bought the property had never really taken care of it. They hadn’t been there in over a year.

“What about the house my grandparents lived in? On the hill?” Kate tried to peer above the crumbling rental. But the house on the hill had been torn down years ago, also fallen into disrepair. 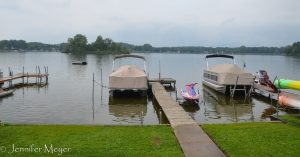 It was a bit of a let-down to see what had come of her grandparents’ place, but the lake itself and the shoreline neighborhood were just as wonderful as Kate remembered it, and it seemed so serendipitous to have run into the neighbor who remembered them from over 30 years ago.

One more stop before we left. We’d seen this Western town from the road, and Kate remembered going there with her brother. It was a hopping tourist attraction then, but closed now, with No Trespassing signs. But we had to stop and at least take a few pictures for old time’s sake.