Jennifer Meyer April 19, 2016 On the Road, Uncategorized No Comments

We left Hill Country in a blaze of color.

It was early afternoon before we peeled ourselves away from Inks Lake and hit the road, soaking in the wildflower views as we drove out of Hill Country. Marsha was flying out of Dallas at 10:00 in the morning, which was four or five hours away, Bessie time. In retrospect, we should have had Marsha fly in and out of Austin, which was so much closer. But at the time, we figured we be making our way north on our way back to Missouri.

Kate had found a state park just half an hour south of the airport that we could stay at for the night. Her only request was that we stop at Waco on the way. Her favorite HGTV show (“Fixer Upper”) is based in Waco, and its hosts, Chip and Joanna, are practically royalty there. In fact, as we drove into Waco, there was a huge billboard with their smiling faces. It said simply, “We love Waco.” No need for identification or explanation.

Kate and I had driven into Waco for a day last spring (see Waco), and we had visited Chip and Joanna’s first store, Magnolia. A small store offering many of the Texas-style decorative items Joanna uses to give her fixed-up homes her own special touch. Giant, rusty clock faces, chicken wire baskets, stoneware jugs, chandeliers made from wagon rims. 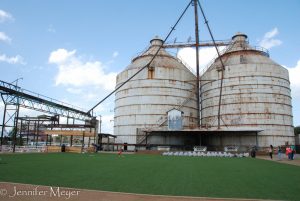 Since then, Chip and Joanna purchased a couple of abandoned silos in the warehouse district and opened their new store there. The store itself is in a warehouse next door; I don’t know if they’ll put the actual silos to use or not, but they are an impressive landmark. As parents of four young children themselves, they wanted to make their store a gathering place for local families, so they added a large grassy game field on the grounds, with an array of toys and sports equipment to use, and a row of beanbag chairs for weary observers. There are food carts, picnic tables… even a stage for live music on the weekends. It wasn’t too crowded at 5:00 on a Monday, but you could see from signs for where to line up to enter the store that this place is hopping-crazy on the weekends.

When we’d had our fill of browsing (and no Chip or Joanna sighting), we walked around town a bit. It was so hot that day (88), that we had to leave the generator running to keep Bessie cool for the fur kids. By the time found a cool place to eat dinner, we were near melting.

Another Near Miss with Weather 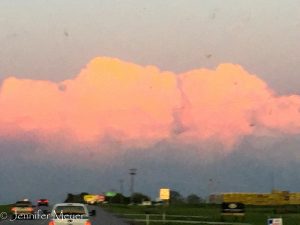 Driving north to Dallas, we kept our eyes on a massive, billowy thundercloud in the distance. The setting sun turned it a brilliant pink, and we were mesmerized. But I also knew a cloud that big had to be serious. When the sky turned dark, the cloud became a giant screen for the best lightning show I’ve ever seen. Streak after streak, as many as six at a time. If I hadn’t been white-knuckling through some of the hairiest construction detours I’ve driven Bessie through, I would have pulled over and enjoyed the show. Tried to get some weather-channel-worthy photos. But there was no place to pull over. And I was stressed out trying to find our campground when Siri had led me completely astray and into a construction war zone.

We managed to keep out from under that voluminous raincloud and didn’t even hit rain. But the next night, when we were able to get some news on TV, we saw videos of exactly what had been going on beneath that cloud while we watched from a distance. Relentless hailstorms with baseball-sized ice balls. Strong winds and lightning strikes. Trees fell. Houses caught fire. Windows on homes and cars were shattered. Hoods and roofs with sledgehammer dents. The center of the storm was in Wylie, just northeast of where we were in Dallas. And officials estimated $20 million of damage had been done.

We had been so close, and I shudder to think of what that storm would have done to Bessie, or what it would have been like to experience.

By the time we reached the state park, it was after 9:00 and we were beat. When we checked in, Marsha asked about driving time to the airport, and when the ranger heard when we needed to be there, he scowled. We would be fighting Dallas traffic during the morning commute. He suggested leaving an hour and 15 minutes for a drive that normally took 30. We’d have to leave at 6:45. 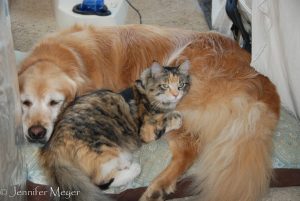 When we couldn’t find a single site that Bessie and the car could fit in, we gave up, got a refund, and drove to a Walmart right near the Love Field airport. We were almost too exhausted to notice the roar of planes taking off over us, and they stopped at midnight anyway. They were impossible to miss, though, when they started up again at 6:00.

I was happy in the morning to have just a ten-minute drive to drop Marsha off at the airport, and although we were sad to say goodbye to our friend, I bet she was happy to get a good night’s sleep in her own bed that night.