While in New Orleans, we kept a close eye on weather reports of an approaching storm. Although we’d experienced nothing more than some wild winds on Wednesday, torrential thunderstorms loomed and were already flooding northeast Louisiana. We had planned to leave New Orleans on Thursday and drive all the way to a Thousand Trails campground east of Dallas, but after Tobi flew home on Wednesday, we decided to get a jump on the weather and leave early. 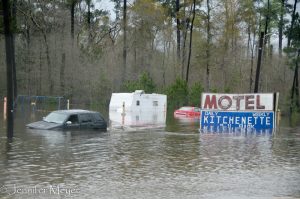 When we left NOLA, the winds were treacherously high, and that’s no fun in an RV, but the rain still hadn’t begun. We kept our phones open to the Weather Channel app, which showed devastating floods in Shreveport, exactly where we were headed. So we chose a longer southern route on smaller roads, which would take us below the brightest colors on the satellite map. It was white-knuckle driving against gusts for several hours, but magically, predicted downpours shifted away from us as we drove. We stopped at a Walmart somewhere in eastern Louisiana and the thunderstorms hit that night.

We hunkered down into the morning, and by 10:00 the worst of it was over. Shreveport had been hit with up to 20 inches of rain, three people died in floods, and the governor declared it a disaster area. Once again, it was a near miss with disaster. Thank god for smartphones. 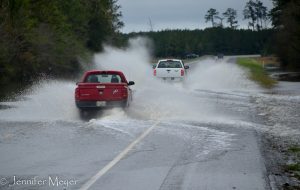 The water was moving fast across the road.

By noon skies had cleared, but we drove on two-lane highways with flooded forest and farms on both sides. Cows shuffled around lakes that were normally fields. Some houses and cars were partially submerged. We saw the highway patrol checking a car that had been swept from the road into a new river. Much of the road was muddy from subsided floodwater.

The first time we encountered a flooded road, we pulled over. This is how people die in floods: trying to drive through standing water, and newscasters always warn against it. But here we were with Bessie on a two-lane road with a car in tow. Turning around wasn’t an easy option. We watched several cars, tons lighter than us, drive through what must have been three feet of water. Eventually, we took a deep breath and went for it, careful not to slow too much in the rushing part. It’s one time when our heft has worked for us. 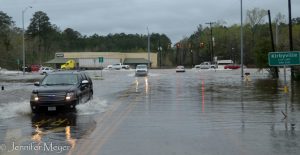 This was a scary intersection to approach.

Another time we approached a junction that was completely submerged. Again, we watched semis and compacts alike plow through the roadway lake. Kate gripped the wheel and drove steadily through. We made it to Texas without any more trouble, but it was a somber drive, viewing devastation right and left along the way.

We got to the campground at the end of the day, and it looked like a nice one, right on Lake Tawakoni, east of Dallas. But the lake had risen well into the campground, and we were lucky to find a dry spot far enough from the new shore to be safe from further predicted storms. 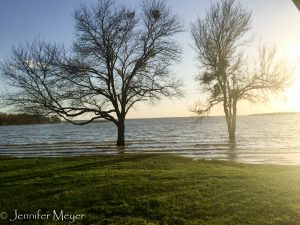 After I left, the sun came out.

I was only there for a quick night. Kate and I rose before dawn the next morning to drive to the Dallas airport, where I was catching a flight to San Jose. (More about that in the next post.) I felt bad about leaving Kate alone in the dismal campground for the weekend, but she insisted she’d be fine. We both had new colds (our first in over a year of traveling), and Kate was looking forward to crawling back into bed with no particular agenda. She had endless e-books, TV channels, chicken soup, cough drops and tissues. And once she felt better, she pulled out her sewing machine and whipped out a new outfit for a friend’s toddler. By the time she picked me up on Monday, we were both well again.