Jennifer Meyer November 20, 2015 On the Road, Uncategorized No Comments 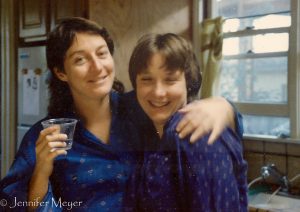 Denise and me in the late 80s.

Denise and I met in Santa Cruz in 1977. We’d both just arrived as fresh-faced young lesbians, right out of college, trying to figure out how we fit in to the bustling metropolis of a lesbian community that Santa Cruz was in the 70s. We took the same women’s Judo classes (where I swear every student in the class had a crush on the soft-spoken African American teacher). And we both volunteered at Matrix, a monthly feminist newspaper that served as the hub of all things lesbian in S.C. (It’s where Kate and I met, too.) When I got a job as a technical editor at Zilog over the hill (in San Jose), I helped get her hired as a word processor (pre-PC days, folks). Later, when she managed the Publications Department at Borland, she got me work as a technical writer. We stayed in touch even after we both left the area, and we’ve known each other 38 years. 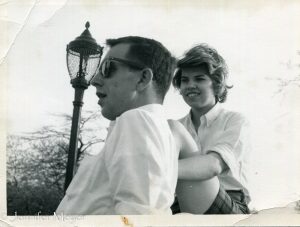 Barbara was someone I knew as a kid. I was nine when my family lived in NYC, and Barb was married to Bill, one of my dad’s first acting students who was now launching his acting career. With no kids themselves, Barb and Bill happily integrated into our family of six. They slept over on Christmas Eve so they could watch us open presents, joined us for Thanksgiving, and babysat us frequently. (Imagine these festivities all in our one-bedroom apartment in Staten Island.) Barb and Bill divorced a few years later, but Bill continued to be an extended part of our family. After my parents’ divorce, Mom and Barb reconnected, and I got a visit from her several years back when she was in Eugene on business. Other than that Eugene visit, all my memories of Barb are vague but warm childhood ones.

Denise has been following my blog from the beginning, waiting for us to get near North Carolina, patiently dealing with our ambiguous plans. At last we arrived, and set up at the Spring Hill Campground just a few miles from her place. That first night, she came over with her border collie, Sadie, and we all squished together to eat dinner and watch the Democratic debate. 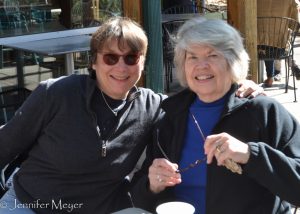 I’d contacted Barb about our upcoming arrival, too. She lives in nearby Durham and was quite busy that week, but she drove over Sunday morning and met us for coffee at the Weaver Street Market in Carsborough. This is such a hip, new age market in an old mill building, with plenty of outdoor seating beneath large oaks. It was just warm enough that morning to sit outside in the sun. Seeing Barb again was great. It’s funny how people can look the same over decades. Hair goes gray, add a little weight maybe, a few wrinkles. But generally, you look at their face and see the same person. It was a bigger leap for her, I imagine, the first time she saw me as an adult.

Denise joined us at the end of our visit, and we went back to her place. She moved to Chapel Hill specifically to live in this co-housing community. If you haven’t heard of co-housing, it’s a cross between condos and communes. A large plot of land is developed with houses or townhouses with a sense of communal sharing in mind. Usually there’s a meeting house with communal kitchen and dining for shared meals, which in some communities happen every night. In others, it might just be on special occasions. Structures are positioned so that all parking is on the exterior, creating a pedestrian/kid safe area within the development. As well as paying nominal homeowner’s association dues, households also pitch in work-hours every week, doing anything from raking leaves to cooking. 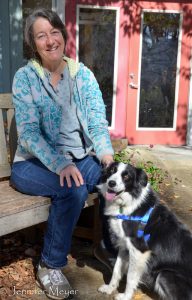 Co-housing communities are as varied as any living situation, but the one that Denise lives in was especially impressive. Though built at the same time, the houses are all uniquely designed and have lots of character. There’s a lot of acreage, including a communal garden and pond. There’s a playground, a field for sports, chickens, and bee hives. The meeting house is so nicely built, with a play room for kids, large dining area and outdoor patio seating, and a state of the art kitchen. They don’t do meals together on any regulated basis, but when somebody feels like cooking, they have a sign-up list and offer the meal for the cost of the food. There’s even a guest area that can be booked for friends of residents. Like any neighborhood, homeowners come and go and you might have good neighbors and bad. But this one had a very good feel to it. Everyone we met was friendly and open, with a positive attitude about the place.

Denise and I took her dog, Sadie, and Bailey on a walk to a nearby Chapel Hill park that includes miles of wooded trails and streams. When others weren’t around, we let the dogs off leash and Bailey was so happy to run free and to have a new friend to chase her.

For dinner that second night, we went with Denise to an Indian restaurant. The food was excellent and the service good. But towards the end of our meal I bit down on something hard in my butter chicken and pulled out a jagged, sharp piece of glass, about ¾ of an inch long. Just thinking about what that would have done to my insides had I swallowed it made me feel a little sick. And Denise, who is a fretter by nature and had been wolfing her food, had an instant stomach ache and couldn’t stop considering what she might have ingested. The manager immediately comped us the meal, of course, and I’m sure they breathed a sigh of relief when we left. 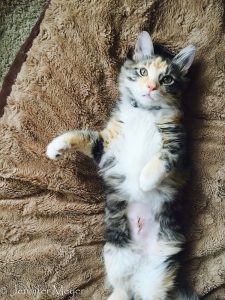 “Little Dipsy,” as we sometimes call our little foundling, has been getting feistier by the week. We never know when we go to pet her if she’s going to purr or swipe. She’s now old enough to be spayed, and we hoped that maybe an absence of hormones would improve her attitude. Denise made the appointment for us with her vet, and on Monday, we dropped her off first thing. The vet, Dr. Smith, warned us not to have false hope about alleviating Gypsy’s mood swings. In fact, he reiterated what we’ve heard several times. Kittens who are bottle-fed and human-raised often have problems with aggression and biting, because they don’t get whapped into place by their mother or siblings. We try to correct her, with a spray bottle, scolding and redirection. But apparently, we need to whap her.

As if to drive home the point, when we picked Gypsy up at the end of the day, the vet tech had a large bandage around her hand. “Gypsy is really a feisty one!” she said. She’d gotten clawed quite badly, I guess, when they were taking Gypsy’s blood samples before the surgery. She was stoic about it and didn’t hold any grudges, but we felt terrible that she got hurt. And Denise reiterated the advice. We have to start whapping our girl when she morphs into tiger mode. But for now, she’s laying low. A bit more subdued than usual while she gets back on her feet. 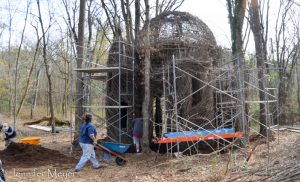 While Gypsy was getting fixed, we went to nearby Hillsborough with Denise. It’s a small town with lots of restored houses and buildings dating back to the 1700s. Right off, Denise ran into a friend who was so excited and enthusiastic about some “installation” she was working on that we just had to follow her into a park. She pointed to a three-story structure being built of vines and twigs. The artist/engineer is Patrick Dougherty, and he uses volunteers to help him in his creations. Although Chapel Hill is his home, he’s created similar stick habitats at botanical gardens and art museums around the world. 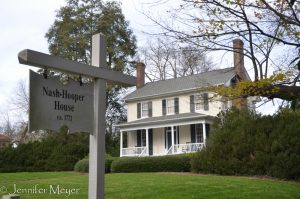 Next Denise took us to the town cemetery, where one of the signers of the Declaration of Independence is buried. We walked around wonderful neighborhoods of restored homes dating back to the 1700s, went to the Visitors Center, and stopped by an art gallery to look for a friend of Denise’s.

I loved Hillsborough. It’s quaint and small and well-preserved. I love Chapel Hill, too. Interesting to find such progressive communities in a state not known for progressiveness.