Jennifer Meyer October 19, 2015 On the Road, Uncategorized No Comments 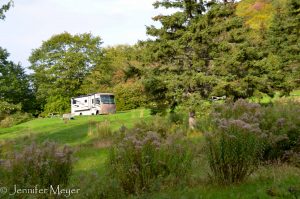 Our site in the Whycocomaugh Provincial Park.

When we decided to join our friends, Marcia and Cindy, in Nova Scotia for the Celtic Colours festival, we were lucky to get the last two tickets together for the opening performance on Friday. It featured Loreena McKennitt, a Canadian singer/harpist/pianist we’ve enjoyed for years, fiddlers Lucy MacNeil and Liz Doherty, dancer Sabra MacGillivray, and a group of ten women fiddlers from around the world called The String Sisters.

We left our national park campground on Friday and moved to a very nice provincial park south of Baddeck, where our friends were staying, and north of Port Hawkesbury, where the show was. The park was nearly empty and we found a wide open site at the top of a hill with a gorgeous view of Bras D’Or Lake. 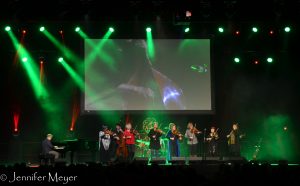 We met Marcia and Cindy at a deceptively good restaurant in a strip mall next to the Civic Center, which was filled with show goers. The Civic Center was packed to the brim with people dressed for a gala. The venue was actually a hockey rink, with bleachers and folding chairs, and we were in the last row. Fortunately, the event was being professionally broadcast over the internet, so a huge screen over the stage displayed the show in well-directed close-ups and zooms.

It was a completely enjoyable program, so well presented with great lighting and sound. Loreena has a clear, haunting voice, the women fiddlers had the audience hooting and clapping, and Sabra clogged like a hummingbird. It was a great, feel-good night and the crowds left grinning, even in the rain.

Marcia and Cindy had only the next day to tour Cape Breton. Their itinerary took them down to Halifax and southern Nova Scotia the rest of their week. We drove up after the rain stopped on Saturday and went along with them on a driving tour. (So nice to be driven, for once!) 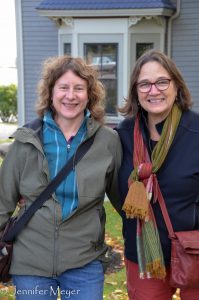 We took a two-minute ferry across of stretch of water that surely could be more conveniently crossed by a bridge, and drove north up Cabot Trail, where we had been the day before. We stopped at a few interesting stores and viewpoints and had lunch up in Ingonish, just before the park. We drove up to the Celtic Lodge, and walked around the posh grounds a bit, then headed back to Baddeck.

On their way to Halifax the next morning, Marcia and Cindy stopped by for breakfast in Bessie and one last goodbye. It was great to connect with friends so far from home.

We loved our campground so much we decided to stay on another night. The Celtic Colours festival has events all week, all over Cape Breton. We visited a blacksmith shop in Whycocomaugh for a smithing demonstration and went into Baddeck again for an art show and open mike at the Yacht Club. I hadn’t known how Scottish Nova Scotia is, but it is so much so that the road signs are in both English and Gaelic, and almost every surname starts with Mac.

We also went to the Alexander Graham Bell Museum in Baddeck, which was quite interesting. Bell was born in Scotland but his family moved to Canada when he was young and he eventually retired in a large estate near Baddeck, which proudly claims him as its own. Bell’s father and grandfather were elocutionists and his mother was deaf. He started out as a teacher of the deaf in Boston, determined to find a way to teach speech to the deaf. Helen Keller was one of his most famous pupils. Another pupil, Mabel Hubbard, became his wife. In 1875, Bell was credited with inventing acoustic telegraphy, which later became a telephone. But he invented many other things, including a metal detector and a hydrofoil. 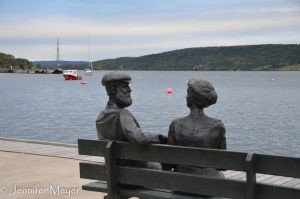 It was a shame not to spend more time in Nova Scotia after the long drive there, but we had plans to be in Provincetown for Women’s Week. So on Monday, we started the long drive down to another cape.