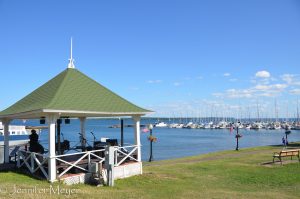 Bandstand at the pier.

This was a gem of a little place we stumbled upon. A small harbor town of just a few hundred, but a popular destination for Midwest tourists. It’s on the northern tip of Wisconsin, next to the Apostle Islands. We set up in a city campground that was a little on the rustic side. (It took us three tries to find a site that was level enough for Bessie.) But it overlooked the lake and was just on the edge of town.

We got into town in time to take a 3-hour sunset boat tour of the Apostle Islands. Kate especially loves a good boat ride, so we went for it. It was an unusually warm afternoon, and the lake was as still and glassy as our captain had seen it. 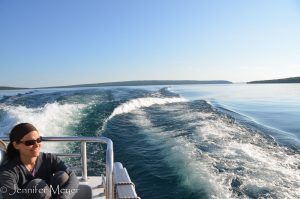 We’ve been boat-spoiled forever by weeklong trips with our friends Claire and Marsha, who used to own a Nordic tugboat. We’ve cruised through the San Juans, around Victoria Island, and up and down the British Columbia coast. In contrast, sitting inside in the back of a full tourist boat and listening to the captain’s stories of local lore while peering through hand-greasy windows at somewhat ordinary islands was, well, nothing to get too worked up about. 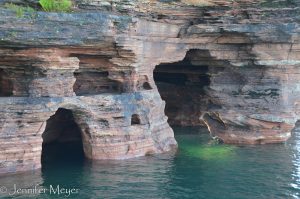 Still, Kate was happy to feel the rocking of the boat and gaze out at the blue, blue lake. And some of the captain’s stories were really quite interesting. For example, the story about a house-moving company that decided to move a house over the frozen Lake Superior in the 70s. Both the truck and the house sunk midway across. Our captain, who grew up on one of the islands as a fisherman’s son, recalled scuba diving after the thaw and going

through the house. He’s still got a saucer he took from the dishwasher. 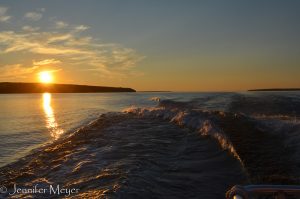 Sunset onto an island.

The furthest island was the most beautiful, and it was worth the time to get there. Devil’s Island is edged with caves and interesting rock formations, created by waves on sandstone. Because the water was so still that day, we were able to get quite close to the island for photos. The light was good, and on the way back, there was a nice sunset to photograph. 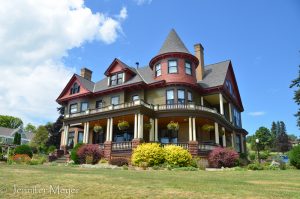 Bed and breakfast on the hill.

The next day we went into town for lunch and a walking tour of the place. We had both Bailey and Gypsy with us, so we found a place with sidewalk seating. The fur kids were a local sensation, getting lots of attention from both kitchen workers and customers.

Bayfield is filled with impressive Victorian homes and buildings, and we enjoyed just walking around, checking it out. One of the islands had a quarry in the early 1900s and shipped brownstone blocks as far as New York. Hence many of the town’s older buildings are made of brownstone, and some of the streets are still paved with cobblestone. 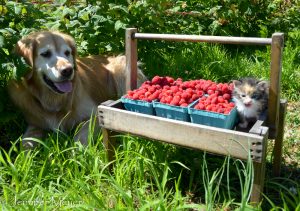 Next, we drove out one of the country roads and stopped at a berry farm. We picked a half-flat of perfect raspberries (for only $12), and Bailey and Gypsy enjoyed frolicking freely in the raspberry bushes. Gypsy is just mastering the art of walking, and every new place we go is a wide-eyed adventure. So far, she’s very brave about the world outside Bessie.

When we saw a winery called “Sisters Winery” with a sign “For women, by women, men welcome,” we had to stop. We thought at first it might be a lesbian-run vineyard, but instead it was a mother-daughter operation, with a feminist slant. Kate did a little wine-tasting, but when the server noticed the wriggling bundle in Kate’s sling bag, then saw Gypsy’s head poke out, all pouring stopped. She agreed to continue the tasting only if she could hold our Gypsy, and then it was hard for her to talk much about the wine. She told us about all the animals she’d rescued, and her various farm animals, and she promised us as much wine as we could carry out if we would give her Gypsy. But we could not be bought.

Back at our campsite, we grilled burgers and corn over a campfire, and the next morning, we dragged our feet leaving this beautiful little lakeside town.