Jennifer Meyer August 20, 2015 On the Road, Uncategorized No Comments 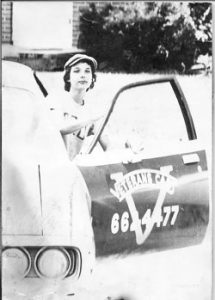 Me as a cabbie.

My family moved to Ann Arbor when I was 18. I finished out my sophomore year at Florida State, and then transferred to University of Michigan, where my father was head of the Theater Department. My older brother transferred to U of M that same year, and we both moved back in with the family. At the end of that school year, my parents got divorced, and my mother moved to St. Louis with my younger brother and sister.

So Ann Arbor holds significance for me, not only as my alma mater, but as the last place we were a family together. I also worked as a cab driver there while I was going to school, which gave me a kind of familiarity with the town that most people only get after a few years in a place.

There aren’t any RV campgrounds anywhere near Ann Arbor that we could find, but we stayed two nights at a place near Jackson, about 30 minutes away. We didn’t really care for the place; it was full of grumpy unpleasant people. But we were spending most of the time in Ann Arbor anyway. 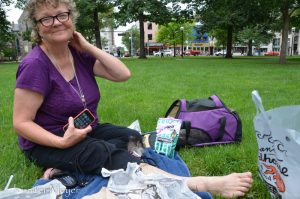 I don’t really know anyone in Ann Arbor anymore, but I was excited just to see the place again. Walk the familiar downtown streets and hang out on the campus. See what was different, what was the same. It was a gorgeous, sunny day – not too hot – and we had both Bailey and Gypsy with us, so we started out with a picnic on the “Diag,” which is the campus lawn adjacent to State Street. The hangout place for students on a nice day.

Being summer, the campus was quiet – so different from the bustle of students during the rest of the year. But there were still a number of people strolling across the diag, and about half of them just had to stop for phone photo shoots with Gypsy and Bailey. 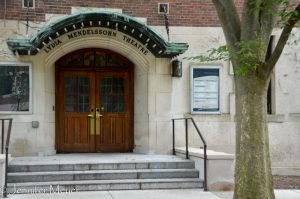 We walked around campus a bit, and I went into the beautiful old building where my father’s office had been. I used to love breezing into his fancy suite with a smile from his secretary. I’d toss my book-heavy knapsack on the floor and collapse on his couch where I’d wait to get a ride home. I felt like part of a royal family, blissfully unaware of the throne’s eminent collapse.

We drove by the apartment I lived in after my parents split, the top floor of an appropriately funky house, which I shared with two other theater students. Then we went back to campus and lounged in the courtyard of the law school, where both my brothers went. 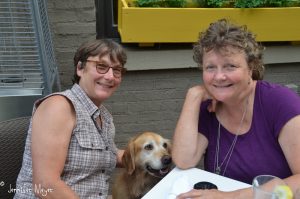 Dinner out with pets.

The next day would be Kate’s birthday, and we knew we’d be on the road then, so we decided to celebrate a day early. We went to a gallery that carried a local artist’s tiles that Kate loves and she chose her own present. Then we found a nice restaurant that would allow us to bring both Bailey and Gypsy (in her carrying case) out to the patio for dinner.

All in all, it was a perfectly nice day hanging out in my old home town.